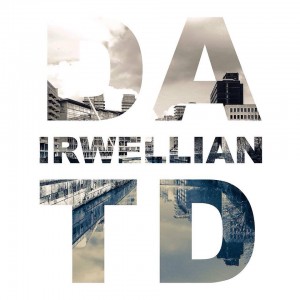 For those who enjoyed ‘Champagne’, the band’s 2014 release – the oddly named ‘Irwellian’ – may surprise on occasion, but will definitely not disappoint. Three of its tunes are a massive step forward in all respects.  In fact, it’s only ‘Things Were Easy’ that clearly picks up from where we left the band previously as they tackle another northern indie jangle, a distinctly British voice sitting atop a wall of chiming guitars.  There’s a great sense of melody shining from within this number, though, as the band keep things upbeat.  While the sheer drive is cool,the big draw comes from an intermittently huge bass rif cranking away from the bottom up, lending more of a nineties alternative flavour to what otherwise could have a more Arctic Monkeys sound.  Reminding us of the band’s musical roots, this is a strong opener.

Beyond this, the EPs three other numbers show a band who’ve grown in playing abilities – and have also become more confident with how to arrange their musical ideas.  With a relatively clean toned guitar in its intro brilliantly counterbalanced by a loud drum part, ‘Candidate’ taps into the softer side of the band.  It is full sounding yet oddly minimalist in comparison to the opening number.  The quieter approach allows the lead vocal to carry a huge weight of the melody – an unsure, wobbling voice gives the piece a wonderful feeling of dramatic insecurity.  It’s not just the vocal melody that catches the ear, mind; behind that a sparse guitar part is beautifully pitched against a lulling rhythm section, the whole arrangement showing a greater gift for melody than pretty much anything on their previous EP.  Following suit, ‘Long Time Coming’ is almost as strong.  While not breaking too much new ground, it showcases a drum part that carries a solid “live in the studio” sound which manages not to crush any of the number’s more fragile elements: another clean guitar line chimes intermittently against a voice with a sad air, resulting in something surprisingly heartfelt and almost soulful.

If both ‘Long Time Coming’ and ‘Candidate’ sound like gems, then ‘The Fall’ is potentially jaw-dropping.  Warm bass parts collide with walls of shimmering guitars and a confident voice pulling together to create something joyous in its retro appeal.  The core sound is almost unmistakable in its influence: those who love the more thoughtful tunes from the Third Eye Blind debut will almost certainly find some enjoyment here.  Those still unmoved by the creeping alternative balladry that sits at the heart of the number should be alerted to its closing moments for noisier thrills.  Its coda throws itself headlong into a pure rawk brilliance as the band leave us with a huge guitar solo to ponder – the kind that Dinosaur Jr’s J Mascis would belligerently place at the front of one of his own epics.  With a flurry of distorted notes and a great energy this EP eventually bids us farewell, happy in the knowledge that on the whole ‘Irwellian’ is huge improvement on the band’s prior recordings.

‘The Fall’ alone is worthy of your time – this tune is so brilliant; even so early in their recording career, it may just stand as the band’s masterpiece.  In short, ‘Irwellian’ delivers four great songs in eighteen minutes…and with barely a moment wasted, Duke And The Darlings tap into their full potential this third time out.  It’s one of the 2014’s best releases – grab it at the earliest opportunity.