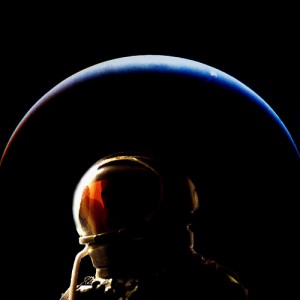 With huge flowing notes, the epic ‘Astronaut (Part1)’ sets the scene, wandering through a quarter hour, it’s opening salvo of overdriven bluesy guitar lines really setting a doomy tone.  As Wax Fang settle down, the doom gives way for some slightly psychedelic edges, with cleaner guitars accompanying a slightly unsettling falsetto voice.  It’s horrible…yet strangely compelling – perhaps deliberately, considering the tale of woe about to unfold.  The instrumental breaks between the verses provide the most enjoyable music, as the bass busies underneath gentle drums and more clanging guitars.  Yes, it’s much better when the voice stops…
At the point where something feels as if it should step up a gear, the loud blues vibes of the intro return for a full-on solo – the notes squealing and bending under their slightly distorted weightiness, before everything stops for an empty space rock drone.  This is where the adventure really begins, with floaty elements insisting the listener concentrate.  With a superb old fashioned stereo split, this section is one of the album’s strongest moments – a simple bass refrain repeats while drums fade in and out, while reverb driven guitar notes float between the left and right channels.  After approximately six minutes of this, extra rhythm guitars are bought in, cranking up the claustrophobic qualities; the volume increases and eventually the band wander back into fuzzy rock, screaming guitars underpinned by aggressive neo-tribal drumming…and there’s even time for a distorted saxophone, reminiscent of The Mars Volta jamming with some late 60s blues band.  In many ways, they’d have been better off tinkering with more ambient brilliance, as it’s by far the best part of this epic opener…though the rock-out moments are strong…and it’s likely this noisy coda represents the shift between atmospheric weightlessness and impending death.   [Don’t forget: under the shifting musical soundscapes, there’s also a tale being told, though the vocal stylings don’t always make any of the lyrical content really obvious.]

A brief segue into the second movement, ‘The Event Horizon’ is pure atmosphere, as an engine-like drone and beeping cranks up the tension.  As the distorted sound rises and the beeping becomes a flatline, there’s a sense of going towards something unknown and then…boom…a tribal drum line launches us head-first into the void.  Although shorter, ‘The Astronaut (Part 2)’ comes loaded with just as much power as the first movement.  Those tribal drums set the scene, pounding a relentless beat, but it’s not until the guitars crank themselves up that things start to really cook.  Intermittent heavy notes evoke stoner rock, while hard muted chords add extra edge.  Better still is this tunes bass part – an oddly chosen ,almost jazz-funk workout that ought not to sit comfortably at all given the spikiness of the whole number, yet it somehow makes the piece.  Keyboards drone intermittently to remind us that this fuzz-rock freakshow is part of a tale set in deep space, which is rather handy considering none of the vocals are particularly audible!  For the big solo, the guitars take a mantle that sounds like Queens of The Stone Age reinterpreting something from the early Santana catalogue, before the drums pull everyone together for a brief garage rock groove. The main musical theme is reprised, before the band go off on another tangent where bass loops bring a tiny influence from ‘Meddle’-era Pink Floyd and keyboards tinkle in a circular motion with traces of mid 70s Tangerine Dream.  The noisier end of the band’s sound dissipates almost entirely, allowing some electronic drones and dark string motifs to take hold pulling you further into the musical abyss. If you like your rock to have edge, there’s plenty to love in this distorted, strung out freakshow. The vocals occasionally get in the way of the really important parts of Wax Fang’s broad and imaginative soundscape (especially true of this second movement), but it’s often clear these musicians are hugely gifted in terms of fleshing things out with the all-important, small details.

Another segue, ‘The Singularity’ is just lovely in its bleakness, as analogue keyboards play out against a minimalist drum, resulting in something that sounds like mid-70s Vangelis, before the final movement [unsurprisingly titled ‘The Astronaut (Part 3)’] sets forth.  The drums lay down a mechanical beat over which multi-tracked guitars settle into a near circular groove.  With the arrival of a vocal, things take a quirky – and somewhat unexpected – new-wavish slant, albeit with a booming rock tilt.  At this point, if you’ve not tuned into the lead vocal, you almost certainly never will.  That dominant voice, however, is the perfect way to deliver such a bleak sentiment as “is this really happening? I miss my wife, I miss my children”, while simultaneously accepting fate; with no way back to the ship, our hero must “open [his] mind and open [his] heart to the universe inside”.  As with most of Wax Fang’s material, the music is far more enjoyable than any of the actual song elements and, in this case, a multi-tracked and looped guitar part really catches the ear, as does a particularly unfussy, Simon Gallup inspired bass part.  If anything, the popish elements of this closing track represent a sharper, more direct element to the mix ‘n’ match Wax Fang sound.  The results are something so far removed from the distorted noise-fest at the end of track one, it’s almost startling. Still, it was pretty obvious from about ten minutes into this release that Wax Fang aimed to keep everyone on their toes.

Like very early Monster Magnet channelling The Mars Volta, while various early 80s goth bands look on adoringly, this slab of acid-doom-space-rock has much to give those willing to expand their minds, even though can be hard going in places.  In terms of narrative it’s dark and downbeat – and, of course, Bowie told a similar tale in a tenth of the time.  Whatever, this is more about the journey than the destination of course…and the stronger moments make this a truly interesting listen.  ‘The Astronaut’ is never going to join ‘Warrior On The Edge of Time’ in the pantheons of the timelessly other-worldly, or even match The Mars Volta for wanton sonic assaults, but there’s enough talent and enthusiasm here to hint at this album attaining a cult status.