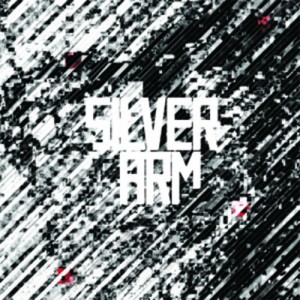 UK four-piece Silver Arm bring plenty of punch and absolutely no padding to their 2014 EP ‘He of the Slow Creep’.  The result – four slabs of fantastic guitar driven post-punk noise in a fraction over ten minutes; four numbers showcasing a band who really know how to hit a sound home as directly as possible.  Naturally, there’s some obvious recycling from a couple of classic influences along the way, but Silver Arm ensure these sounds will thrill listeners who weren’t even around to hear the first wave of post-punk and goth rock bands in the early eighties.

The opening number – the title cut – shows the band at their most simple.  For two and a quarter minutes, the drums pound near relentlessly; there’s very little shift from the initial snare bashing, with most of the interest coming from the hi-hat.  Topping that, a reverbed wall of guitars are also quite basic (in a good way), the resultant sounds falling somewhere between  Fugazi and a Pixies-inspired reinterpretation of surf rock. It’s repetitive, but that in itself proves effective by the time the third verse rolls around and they’ve really started to suck you in.   As the EPs most commercial track – certainly the lightest – it’s as if this were a warm-up…from here on, Silver Arm take their sharp edges and make a play to drive them through your skull.

‘Black Magician’ weaves a bass riff into something dark and neo-gothic, the opening of the number’s near tribalism recalling moments from Southern Death Cult and early Killing Joke.  Like a light through the darkness, ringing chords cry out before forcing themselves to the front – at first slightly distorted…and then very distorted.  Their angular approach once again evokes the best of Fugazi, while the dark tones and anger tap the most primitive elements Joy Division.  Combining this fantastic tune with Gareth Hughes shouting and wailing like he’s been possessed, it’s near impossible to not feel energized by the end result, especially after latching on to Tom Answer’s superb bass work – a great feature throughout.  Reinstating the simplistic pounding heard on the opening track and combining it with the distorted crash of ‘Black Magician’, both sides of the Silver Arm sound come together in a flurry of overdriven brilliance as the band truly unleash their fury on ‘Bad Blood’.  A live in the studio sound really brings out the anger and ugliness of their core sound – this time, with Leon Forde’s pointed guitar motifs dominating.  Perhaps more here than ever, the band makes an attempt at offering a catchy hook and a simply repeated “this is bad blood…bad blood, a place where no-one goes” works excellently with absolutely no need for embellishment. A brief respite from the noise comes courtesy of a haunting bridge, but just before you get chance to catch breath, Silver Arm wheel out the hook loudly and brazenly once again, just to make sure it’s remembered…and you can be sure it is.

Taking the best elements from their previous tracks, Silver Arm go out with all guns blazing on the closing number ‘Gunboat’.  The Killing Joke styled rhythmic qualities make a much welcome return, while the guitar riffs stretch a little further than a couple of the previous tracks, combining a shrill attack with occasional shifts into meatier noisemaking.  As before, Ben Brown proves a powerful – if oft unsubtle – presence behind the drum kit. His general attack provides a great backbone for the huge wall of noise in front; a noise that’s now fronted by a man shrieking and sobbing in a manner that would make The Jesus Lizard’s David Yow very proud that his marginal approach to vocalising had left such an enduring influence.  With post-punk sharpness, the quartet bring forth all that is great about previous works by Gang of Four and Killing Joke (albeit with fewer decipherable lyrics) thus distilling an amazing amount of angular power into just under three minutes, delivered with an amazing power and all-important self-belief.  This is Silver Arm at their rawest – and it’s great.

The sheer energy of Silver Arm’s music combined with an often distorted vocal is the sound of a terrific force – the sound of a band who already understand that their assault is best delivered in a short bursts, always keeping their sharp attack invigorating in the extreme.  For fans of all things post-punk (particularly bands like Gang of Four and Fugazi), this EP is absolutely not to be missed.