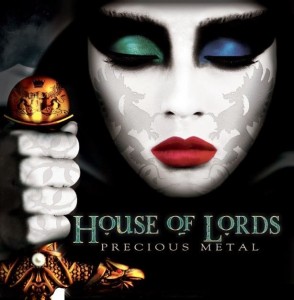 House of Lords reconvened for live shows eight years after their original split and their first recorded work, 2004’s ‘World Upside Down’ [recorded in 2000], was well received by the parts of AOR community despite a shift in sound towards something a little harder than previous offerings.  Since then, the band have released new material regularly – just as regularly than in their first lifespan.   Although only vocalist James Christian remaining from the band’s first incarnation, 2014’s ‘Precious Metal’ (the band’s sixth record for the Frontiers label) reunites him with guitarist Jimi Bell and drummer BJ Zampa – by this point, among the band’s longest-serving members – for a (surprisingly) excellent successor to 2011’s ‘Big Money’.

‘Battle’ takes no prisoners in terms of opening gambit.  Bell churns out a selection of dirty notes by way of atmosphere, before the rest of the band chime in with some rather unsubtle pomp.  The keyboards are fat – the kind you’d expect to find on an early Ten record – while the drums thunder apace.  James Christian’s vocal style is subject to a little filtering throughout, but even so, they’ve left enough edge present to give a sense of reality – and this end result makes him sound fuller (and perhaps better) than on the previous couple of albums.  The chorus, more bombastic than hooky, lends a fist-clenched goodness, but it’s with the arrival of the featured solo that this tune rises from merely very good to something nearing “classic” in HOL terms.  Bell’s prowess across the fretboard shows a man with style; a man knows there’s a line between impressive sweeping/picking and mere widdling – and it is a line he seems never tempted to cross.   Shifting away from the pompous, ‘I’m Breakin’ Free’ is classic, classic AOR – choppy riff, huge chorus, great soloing.  The music is assured – cut from a well-worn melodic rock cloth, but none the worse, while a world of multi-tracked voices recalls many a great piece of hard rock from the 80s.  If you still love AOR, this surely represents why.  Similarly, ‘You Might Just Save My Life’ brings a lot to the table in terms of familiarity and yet retains an edge of melodic rock charm and excitement.  The mid-paced guitar chops sit nicely against a rumbling bass, while the lead vocals occupy a space between tough and tuneful, with Christian’s underplayed grit making the best of the material.  As before, Bell steps up for a brief solo – just enough to mark his presence – topping off a solid hard rock affair.  While not necessarily as bombastic as late 80s HOL, it’s great hard rock in its own way.

For stomping hard rock brilliance, it is hard to argue with the riff from ‘Raw’. The slightly groove-laden stomp recalls XYZ and that creates a great backdrop for Christian who sounds confident when bringing his voice down to lower registers. Zampa’s solid drumming style really gives the track a thumping send off, while during the fast-paced climax, there’s time enough for another cracking solo.  In terms of old-school hard rock the music ticks all the right boxes, but lyrically, more of a chorus would have been nice.  Actually, something even vaguely memorable would have been a good start.  Despite this, ‘Raw’ remains an enjoyable hard rocker.  Perhaps the best cut on the album, studio techniques allow ‘Action’ to bloom with a choir of Def Leppard inspired vocals, while the music brings a brilliantly bloated revival of 80s hard rock – like ‘I’m Breakin’ Free’, the musicians pull together here to create something that’s as close to perfect as AOR gets this far past its heyday.  There’s nothing here that’s groundbreaking – or, indeed, even vaguely unfamiliar – but House of Lords sound better than most of their peers.   ‘Swimming With The Sharks’ pushes HOL into 80s Dokken territory with its punchy, no-nonsense approach and while lyrically cheesy, should please many melodic rock listeners.  The music is far more important than any lyrics here, though, as the band powers ahead – faster and harder than most of the material on their previous couple of discs.  Be sure to listen carefully under that loud drum sound and staccato guitar work, though – Chris McCarvill cooks up some busy bass runs, helping the track to retain a driving appeal.

Although ‘Precious Metal’ has plenty to offer the melodic hard rock fan, it’s not perfect – there are a couple of tracks on which the band obviously falter.  One of these missteps is the big ballad and title track. You might expect that since it was a ballad that gained House of Lords the most exposure way back when (a cover of the Blind Faith classic ‘Can’t Find My Way Home’), this album’s most obvious ballad would provide a memorable moment.  Sadly, title cut is too saccharine (although this may just be in relation to the rest of the disc) and just ends up being a mild irritant. Its slower, quieter approach allows Christian ample room to curl every syllable for dramatic effect, against a lacklustre tune.  Despite having a (slightly tweaked) James Christian out front and centre, surprisingly, he’s not responsible for this track’s most memorable elements.  Those all-too-briefly enjoyable flourishes are undoubtedly be the sweeping guitar break (a most welcome addition) alongside a warm and unfussy bassline from McCarvill.  It’s only Bell that saves the piece, in truth…it’s certainly the album’s weak link with its rather cheesy lyric and thin keyboard sound – odd they would choose to name the album after this?!    The unnatural use of autotune at the outset of ‘Enemy Mine’ also presents a (minor) sticking point, as things drift too far towards the cold and unnatural, but before long things settle into another reasonable melodic rock affair.  It’s outshone by most of the material here in most aspects, but HOL fans will undoubtedly enjoy hearing James Christian harmonising (and that term is used loosely, given the roughness of the voices in places) with his wife – the melodic rock legend Robin Beck.  [Her own ‘Trouble or Nothin’, released in 1989, remains one of AOR’s most essential discs]

The sharp production, a solid set of songs (all recommended listening in their own way, bar that title track) delivered with a largely uptempo approach, makes ‘Precious Metal’ the best House of Lords album since their reformation. While not quite up there with the first three albums, it comes pretty close and is a sharp reminder of everything that’s enjoyable about Christian & co when they’re on the money.  While probably unlikely to win House of Lords too many new converts, this ninth offering is a fine, fine record indeed.