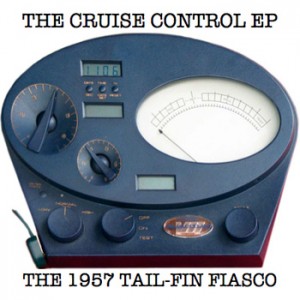 Having already released their ‘Private Jet Flashback’ album at the beginning of the year, 2013 proved very busy for Essex-based pop rockers The 1957 Tail Fin Fiasco, as they also dropped this EP of extra material in the autumn.  It’s not clear whether it ought to be regarded as a companion piece to the full album or treated as a stand-alone EP in its own right, but what is clear is that this is a band you should not miss.  This raises the bar with regard to how something self-released should sound sonically, while musically the band Indulge in a whole cavalcade of 70s pop sounds, that’s absolutely thrilling in its all too knowing retroness.

Even at their weakest – as on ‘Breakfast of Kings’, a lolloping and slightly woozy waltz – the band’s talents are more than obvious.  While the tune isn’t especially their most striking on a base level, there are moments of brilliance to be heard throughout, courtesy of a sweeping lead guitar and Fender Rhodes electric piano.  With the guitars firmly in the left channel and piano in the right, the band show no mercy with regard to wanting as retro a sound as possible.   If this already sounds like your cup of tea, then the other three tracks will be a positive delight. ‘Legend of Josie and the Juke’ taps into a slightly bluesy mood in places, but the old fashioned electric piano wins out again, eventually proving to be the centrepiece of this particular number and, indeed, crucial in making the band’s sound really bloom with such a retro cool.  Looking deeper than the music itself, lyrically it’s also quite fun, throwing out the sentiment that the protagonist was “born a cowboy” but will “never ride a horse…it’s all about the boots and the hat”; these Western themes are in contrast with the namechecking of Leyton, referencing the band’s own locale…and is the odd reference to teeth a gentle nod to the Steely Dan classic ‘Your Gold Teeth’…? Only Tailfin know for sure.

‘List Song’ fuses a fantastic tune and equally lovely harmony in such a way that the band’s fascination with Steely Dan becomes more than obvious, it’s killer moments coming via of a couple of unashamedly ‘Can’t Buy A Thrill’ inspired guitar breaks.  If you love good ol’ fashioned westcoast pop, check this out, you certainly won’t be disappointed.  These songs sound bigger and better with every successive spin, but still none hold the sheer thrill of hearing the title cut for the first time (a thrill that doesn’t especially weaken with each successive play).  Stabbing electric piano lends a definite urgency, while a busy guitar riff from the left channel beavers intermittently, creating the basis for this homage to the 1970s.  The lead vocals come in a slightly strained manner – imagine a cross between Donald Fagen and power pop cult hero Mike Viola and that’s kinda what you’re in for here.   The sounds of AM radio’s golden years shine as brightly as ever, and in this song in particular, the mighty Silver Seas have stiff competition for their retro-pop crown.  The music is superb and shows a consistently great energy, while the song writing is every bit as strong – everything there is to love about the TFF is all here in one package.

The fact that such American AM radio sounds could sound so genuine from a bunch of guys holed up in the wilds of Essex just shows how much love for the music they have. Huge swathes of Steely Dan collide with touches of Andrew Gold and 10cc with alarming regularity, putting this release right up there with Swedish duo’s State Cows’ debut in terms of a surprisingly authentic sound. In short, ‘The Cruise Control EP’ is a short burst of brilliance, absolutely not to be missed by aficionados of mid-seventies inspired pop/rock – grab it as soon as possible.