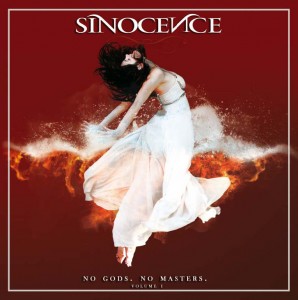 Pulling no punches, the disc leads off with a near seven minute epic, ‘A Coda on Self Slaughter’.  It’s intro is impressive: bringing elements of classic eighties thrash metal to the front, coupled with a rather nifty guitar solo, this certainly catches the ear – especially considering that guitarist Ant offers some great playing straight out, with almost a song’s worth of lead break within the first ninety seconds alone. Perhaps the most impressive of each of the number’s many facets is the decision to place an almost crooned, clean voice against such heaviness.  With the slightly filtered feeling in places, there’s a hint of the melodic edge of Fear Factory, although Sinocence never quite settle for making their frontman sound quite as other worldly as a few effects have occasionally made Burton C. Bell sound.  Factor in some fantastic drums and more old-school school leads and this track has a little something to offer most fans of more melodic metal.  If this caught your attention, the rest of the release has more of the same brilliance to give. ‘Long Way Down’ comes with a fantastic intro, full of downtuned riffs in a near djent style, while drummer Davy hammers out some near tribal work.  In a surprising move, a clean tone takes the dominant role during the verse, with lead bass work and ringing guitar notes colliding with each other effectively.  The heaviness creeps back for the chorus, but despite the big crunch, vocalist Gareth ‘Moro’ Morrow keeps things melodic.  Although the music isn’t always quite as ambitious as parts of the opener (the band focusing more on a solid brand of alt-metal), it’s all impeccably played with each of the band members bringing something special to the fore.

‘West of Eden’ is loaded with lots of late eighties/early nineties metallic elements, with a few great staccato moments and also traces of ‘Persistence of Time’ era Anthrax within the instrumental sections, though this has much to do with the punch of the drum sound and the way it occasionally hits against the guitar chug than any deliberate homage.  As you’d expect, this provides an excellent grounding for another superb piece of metal (particularly so, during the instrumental parts), but it pales in comparison to the mighty ‘Occams Razors’, where the band tap into far more complex sounds.  An atmospheric intro and a whispered vocal kick things off ominously, as if the band are about to venture into a dark and gothic world, a la My Dying Bride.  Before long, though, they revert to some tried-and-trusted alt-metal.  The twin guitar sound is slightly muddy, although never in an unpleasant way, while Gareth Morrow’s vocals show a greater range than before. Tackling something a little more gravelly when it comes to the shorter notes, his push and pull between metallic gruffness and old-school melody places the band in a strong position.  The chorus has a provoking sentiment of ‘God vs Love vs War’ – despite great sense of melody and a good overall performance, it’s not as catchy as you expect, but then, this is far more about musical impact than hook filled singalongs.  Things really heat up for the instrumental break as Ant, again, shreds in a rather pleasing way, underpinned by a fantastic bottom end rattle from bassist Jim.

‘Cruelty In Silence’ finishes this mini-album with a tune that captures Sinocence in top form.  From the opening flurry of downtuned riffs and hi-hat work, the band plough forward into a world of fantastic chugging riffs.  As you may expect for something with such a tough stance, the guitar leads are suitably edgy too, making a near-faultless metallic onslaught.  The chorus isn’t as good as could have been, especially given the quality of the music, but even so, it’s near post-grunge sensibilities still create the kind of hook and sense of melody that Breed77 have been trying to capture for years (…and in turn been largely missing their mark).

‘No Gods, No Masters Vol 1.’ comes full of great tunes and exceptional playing: when it comes to this kind of metal, you can’t really ask for more. These Belfast chaps have plenty to riffs to hammer your way; if that’s what you came looking for, you won’t be disappointed – and neither will anyone else willing to approach them with open ears, for that matter.  Recommended.