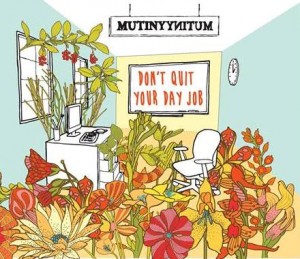 While the same post-punk brilliance provides the core of most of their material, at times there is a definite shift in the vocal department, with a greater interplay between the bands two voices [Jason Dean, guitar and Jenn Schmidt, bass].  The band also have a different rhythmic energy at times too, thanks to the arrival of drummer Stormi King (replacing Marc Mazique).  These changes are at its most pronounced on the upbeat indie rock workout ‘Hand Over Fist’, a track where Jenn’s new wave-inspired vocals are perhaps lighter than expected, while the sheer vigour of the piece bears little resemblance to most of ‘Constellation’.  With this particular tune, Mutiny Mutiny wind up sounding more like a band who’d be at home on the 4AD label than anything previously. It’s a number that uses all of its alt-rock charm well, however – the limited harmonies crash through the chorus in a timely fashion, while a keen lead guitar cuts through the core of the piece with a real sharpness; slightly atonal, yet rather charming in its cheekiness.  The drum part of ‘Stranded At The Drive-In’, too, makes the best of the band’s more upbeat tendencies as a plethora of hi-hats busy away against a quirky rhythm.  On top of this buzzing backdrop, Dean’s guitars settle into a riff that mixes off-kilter, two note leads with a wall of angry rhythm work.  It’s so musically tight and tough, the vocals almost seem secondary, but even so, the dual lead between the band’s mouth-pieces sits perfectly among the orchestrated chaos, reminding the listener that – when they get it so right – Mutiny Mutiny are a force to be reckoned with.

The title track takes things down a notch, as the trio indulge in ringing notes and some downbeat vocal melodies.  With a musical approach shows a strong influence from the post-punk sounds that filled their debut, the chorus crashes along with huge clanging chords.  While musically more in keeping with their prior recordings, there’s a increased focus on vocals this time out; the combination of intense guitars and slightly flat vocals works excellently throughout this particular track. Whether joining in off-kilter harmonies or playing against each other, both Jason and Jenn’s voices play a key role in lifting what could have been one of Mutiny’s more ordinary arrangements. Another slow workout, ‘Across the Wire’ brings yet more influences to the fore.  Unsettling yet beautifully atmospheric, there are hints of very early Smashing Pumpkins’ drifting in, thanks to a solid bassline that’s more than reminiscent of the work of D’arcy Wretsky. The way the bass almost hypnotises while multi tracked guitars indulge in various patterns of sound also hints at a strong Pumpkin-love – but it’s pure influence as opposed to blatant plagiarism.  Here, more than ever, the vocals are surplus: there are few lyrics and the voices come rather unassumingly…but the tune, the tune is wondrous – and too short.  So different, yet familiar, this is just fantastic.

With a flat, almost shoegazey vocal, ‘Rapture Fail!’ threatens in its lumbering slowness.  Distorted guitar lines shift between off key, atmospheric pieces and sharp, aggressive chopping in a Thurston Moore fashion.  A few fast bursts of noise lift the piece – albeit temporarily – before the band head back into fairly leaden territory.  While the basis of the music is typical of the band’s favoured sounds, Mutiny Mutiny rarely miss the mark as widely as this. Even so, while it’s certainly far less interesting than this disc’s best material, there’s still Jenn’s bass work to contend with – a huge and heavy anchor that makes the even the most atonal stuff make sense.

With regard to the other songs, existing fans should delight in either drowning in sonic textures, or having their senses rattled through angular, semi-distorted noise.  While not immediately striking, a couple more key numbers demonstrate the broadening of the band’s palette. ‘It’s a Chop Shop’ brings one of the album’s best intros, as a near-militaristic drum vibrates with a live sound, before the rhythm guitars attack with heavily muted strings, while ‘I’ve Swallowed Alphabets’ teases with some of the cleanest vocal harmonies in the Mutiny cannon, before dropping back to play with call-and-response voices and (as on parts of their previous record) an almost Wire-inspired spikiness.

‘Don’t Quit Your Day Job’ is an interesting record, in that it wisely gives existing Mutiny Mutiny fans something familiar, yet rarely sounds like a complete repetition of previous work.  This is a good thing: since the debut was so good, it would have been all too easy to just knock out a carbon copy.  The subtle changes prove this is a band keen to move forward.  Their forward motion is often measured rather than just running blind into different, unexplored areas of alt-rock, but each of the new themes explored here yield successful results.  In fact, the album’s weakest number (‘Rapture Fail!’) is one of the times the band make a complete retreat for their musical comfort blanket.

Whether channeling  noise, celebrating alt-rocks glory years (circa Sonic Youth’s ‘Goo’) or just hammering out some good time  distorted rock with surprisingly hooky results, Mutiny Mutiny can be heard in fine form on this second offering.  It’s not a perfect record, but those who liked ‘Constellation’ will find an enjoyable listen here, even if it’s one that, at times, appears uneven.