Born in Texas, Reagan Browne made California his home in his pursuit of a musical career.  With help from well known musicians such as Billy Sheehan, Marty Freidman, he says his current record is his best yet.  Classic Rock Magazine have questioned as to whether Browne could become an AOR sensation.  In the aftermath of his UK visit, REAL GONE caught up with Reagan to discuss the past, present and future…

RG: So, you’ve just returned home after a brief UK tour.  How did that go for you?
RB:  “My whole experience in the UK was one of the best times of my life. Couldn’t have really gone better. I did three shows and they were all better than the previous. Amazing crowds that were actually singing along to my stuff. I had a top-notch local band  put together by this great local London guitarist named Damo Fawsett.  I made a lot of new fans, friends and connections in England…I can tell you that.”

RG: We hear you tested a fair amount of real ale while you were here…
RB:  “Oh, man, I tried some great ones! My liver wasn’t thanking me though! It seemed like every time I walked into a pub or restaurant I had to try some amazing new beer that I hadn’t heard of before. The stand outs for me were Sharp’s Doom Bar and Magners Cider. The quality of beer in England is definitely a step above the beers in America”.

RG: Do you have plans to return?
RB: “Absolutely! All three shows were such a success that I’m already working on coming back over for the summer circuit to play all over England and Germany. Maybe some Scandinavian countries like Norway…would love to play at a few festivals like Download as well.”

RG: You have three releases available now.  Artists often pick their most recent as their favourite – presumably to do with the material feeling the most fresh.
RB: “I know it’s such a cliché, but I feel that my current release [2013’s ‘Reagan Browne’ EP] is my best yet.  The songs, vocals and production are at a different level than my previous work. I had some amazing help from some talented people with this one too, so think that made a difference.

“I think that I really came in to my own with the new one because the mix of US modern rock and classic rock style represents who I am as an artist, more than the first two, where I was still finding my way. Saying that, though, I’m very proud of what I accomplished on my first two albums and get reminded by fans that they love them.”

RG: After the release of ‘Dog Eat Dog’ Jani Lane (RIP) said it was the first Warrant album he was truly happy with, wanting to “burn the first record” and re-record the second. If you could improve anything on your early releases, what would it be?

RB: “My first record, ‘Comin’ Home’ was a new, scary process for me and felt I barely made it out alive on it.  I had never been in a recording studio so didn’t know what I was doing. I think because of that, though, that record has a raw,edgy feel to it that has resonated with people thru the years. I had some cool songs on it, songs I still play live, like ‘Slingin’ Dirt’, ‘Sweet Diane’, and ‘I’m High On Loving You’. The second record, ‘Daydreams In Stereo’ was a big step in the right direction and expanded my songwriting and vocals that I wasn’t able to do on ‘Comin’ Home’. I think I wrote some great songs on both albums, but if I could change anything about them, it would be to re-record my vocals. Maybe add more layers to the music to give it more color.  My voice sounded good on them, but it’s at a much higher level now I think.”

RG: When did you decide on your current career path?
RB: “For whatever reason, singing came pretty natural to me even as a kid. I always sang, but the pivotal moment for me was when I found out I could sing along to all these difficult songs from Guns N’ Roses, Whitesnake, and Soundgarden, as far as vocal range was concerned. When I started to get comments from friends like “hey man, you should be a singer” and “you sound great when you sing ‘Still of The Night’ by Whitesnake”, I thought to myself, well maybe I’m doing things that a lot of people can’t do.  So I started to pursue it more and more.”

RG: Tell us about your favorite albums.
RB: “My first major band that started me on music was The Beatles, who and I try and listen to as much as I can to this day.  The albums that had a major impact on me, though, the ones that made me want to sing or play the guitar were all the early Van Halen albums with David Lee Roth…and ‘Badmotorfinger’ and ‘Superunknown’ from Soundgarden.  That was for Chris Cornell’s vocals – he’s my favorite rock singer of all time.  I’m a big fan of that Whitesnake album  from 1987 as well, with ‘Here I go Again’, ‘Crying In The Rain’ and ‘Still Of The Night’, because of David Coverdale’s soulful, bluesy voice.  I also love the first two Led Zeppelin records for Robert Plant’s voice.”

RG:  Most musicians, when asked about Zep, go straight for ‘Physical Graffiti’…
RB: “Well, for the whole picture, it’s ‘Physical Graffiti’ for me, too; that’s their masterpiece. The reason I picked the first two was more for the vocals.  On the first four Zeppelin albums, Robert Plant was untouchable for his screams, his power and energy.”

RG: With regard to music on the UK terrestrial TV front for the last few years, it’s been all but dead.  The only choice for “serious music” is ‘Later With Jools Holland’…but even that isn’t a patch on what it could be. It seems to be mostly reasonably well established artists popping up, or occasionally the appearance of some hipster band.  For up and coming hard rock acts TV seems to be a non-starter. How is US TV with regards to music coverage at present?
RB: “Sadly, it’s about the same over here in the States. When you turn on the TV in America you also get the hipster, indie folk type bands that are crowding the airwaves. I don’t really mind those bands too much, and actually like bands like Fun, and Mumford and Sons, but just wish I could hear a band that actually has a distorted guitar, and screaming vocal once in a blue moon. I honestly believe it will come around to rock n roll again eventually, because sooner or later people are going to get sick of hearing music that just doesn’t have much energy to it. That’s how I feel, but maybe I’m wrong”.

RG: Aside from ‘Later’, it’s all about the TV talent show here with regards to music shows.
RB:  “Yeah…again, it’s the same here.  It’s all about the now and taking short cuts to get to the end results, with more or less zero substance along the way. I never watch any of those shows, because nine times out of ten the acts all sound like bad cruise ship singers with no feel or soul behind what they’re doing. How could they have any of that, though, if you think about it? They’ve never played a gig, never paid their dues and never learned what – and what not – to do. I guess what I’m saying regarding most of those singers on talent shows is…they have no mojo. That’s something that takes time to get.”

RG: Whereas previously TV exposure would have been of huge importance, these days, you can get a lot of attention via the internet and word-of-mouth.  Sites like Bandcamp have meant that there’s now access to more DIY/independent re 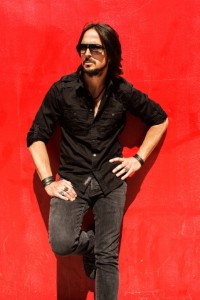 cordings than ever before.  Has the internet been a useful springboard for you, or are the best results still gained via your live work?
RB: “The best results are the old fashioned way I think – playing live, building up a grassroots following one fan at a time. The internet isn’t always the best option in a lot of ways as It’s in danger of becoming too overwhelming; people are constantly being bombarded with requests and invites and what not. On Facebook, I get invites ten, twenty times a week from bands all over the world to come to their show. How the hell am I suppose to keep up with that?! I hate to say it, but you just eventually  tune it all out and don’t necessarily check them anymore. Back when Myspace was big, it was an amazing springboard for people to hear your music from all over the world. But then, the problem with that is any guy that’s played the acoustic guitar for 3 months and has a decent enough singing voice all of a sudden thinks he’s going to be the next Bob Dylan.

“Unfortunately they can be the ones that are sending out requests to thousands of people to hear their new masterpiece seven days a week.   Tunes recorded in basements on boom boxes are in danger of crowding the airwaves, meaning that good, legit bands are getting overlooked. I’m sure there are some new great avenues on the internet that are working for bands to get there music out there, but haven’t heard of them so far. I’ll keep my eyes open.”

RG: Elton or Billy?
RB: “That is a great question…and I ask myself the same thing every time I hear them. It’s very close in my opinion, but think Elton has the slight edge. I used to work for him, though, so maybe I’m biased…”