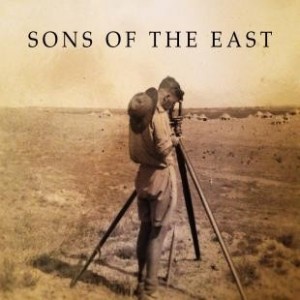 This self-titled EP is the debut outing from Australian trio Sons of the East.  Self released, there’s a warmth in the material that suggests it’s been a while in the making.  Those who enjoy acoustic music are almost guaranteed to come away having heard something great, even if they don’t enjoy everything on offer.

‘Miramare’ is a rather warming acoustic tune, where finger picked guitar meets occasional bluegrass inflences.  At the beginning there are hints of the likes of Jack Johnson, though more interesting, but  as it progresses the Sons branch out, ending up more a little more like the wonderful Low Anthem with a vocal inflection hinting at Passenger.  Its soft and appealing nature is enforced by the minimal use of percussion throughout, allowing the naturalistic vocal and guitar strings to carry the weight – and between those two elements, there’s much to love here. Pulling in for a slightly bigger finish, the band’s folk stylings begin to build, as a banjo leads off for the instrumental climax.  As the first exposure many will have to this rootsy trio, this opening number is an absolute winner.  To begin with, ‘Come Away’ sounds as if it may be even better displaying a much deeper mood at start.  The previous blend of acoustic instruments is at the fore and the addition of an understated piano line is just lovely.  But then, something changes – and for those not into bluegrass influences, it’s a change that’s positively distracting, as the balladeering parts give way to a slightly intrusive banjo.  We’re not talking a full-on backporch stomp, as the Sons’ wisely keep things on the enjoyable side of heartfelt, but this is certainly a number that sounds as if it ought to have been better without the banjo and harmonica interludes.

Despite initial promise, two more numbers increase the folk/bluegrass influences to the point of minor annoyance, when it would have been much nicer to experience more pastel shades and heart-tugging lyrics instead… ‘Hold On’ continues the banjo theme to the point where any comparisons with the sickeningly over-rated Mumford & Sons become unavoidable.  At least, if nothing else, there’s an occasional sense of softness in their material that most of Mumford’s material lacks in it’s overbearing hideousness.  Despite best efforts from the other instruments, the plucky banjo still wins out and eventually makes this a skipper. Worse still, ‘California’ mixes the band’s previously explored folk and bluegrass leanings and throws in a droning sound (presumably hoping it’ll somehow hit home their Aussie heritage); there’s nothing else here you won’t have heard in the previous couple of numbers…and repeated listening could cause a gentle case of banjo fatigue.

Proving all hope shouldn’t be lost, the EP’s other number ‘Facade’ is far and away Sons of the East’s most accomplished tune, not least of all for the fact it’s only one likely not to cause a case of banjo fatigue.  Sparsely played piano, soon blossoming into a major key beauty, with some near-husky vocals tones complimenting such gentleness in a very reassuring manner.  The addition of acoustic guitar and soft string sounds rounds everything out wonderfully and – withough the banjo interfering too much, just plucking gently somewhere in the back – this is a key moment for the band. It should be a sign to most listeners, that regardless of musical preferences, these guys know how to write and arrange in the manner of guys with ten times their experience.

As well played as it may be, the bluegrass elements rely far too much on riding the folk tidal wave caused by the frankly awful Mumford & Sons (surely folk music for those who’ve never heard any real folk music).  Aside from those, this debut EP features a couple of really promising acoustic and rootsy tunes, proving there’s the heart of something potentially great here. Downloading ‘Facade’ and ‘Miramare’ is highly recommended.