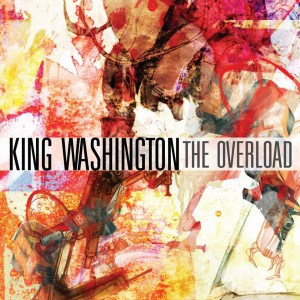 King Washington’s debut album [‘The Gears’, released in the summer of 2012] was a special record indeed.  The previously unknown band really made an impression with their blend of retro roots rock and slightly more 90s attitude.  Just over a year later, their musical journey continues in a different manner, with KW keen to both expand their range of sounds on ‘The Overload’ and to shift outside of their comfort zone.

On the album’s title cut – the first taste of this second bunch of tunes – King Washington appears to lash out against so many of the brilliant and  (perhaps, more importantly – accessible) melodies that could be found on the debut.  ‘The Overload’ is, indeed, true to its name in places, as the band indulges in screams and a general musical darkness, topped by discordant guitar work.  For those who heard ‘The Gears’, this may come as a surprise; in the spirit of adventure, if KW were aiming to alienate people here, they may well succeed in turning a few people off.  Lighter – though still intense in its own way – ‘Land Without Age’ masks some of its natural melodies with more loud-ish guitars and a general wall of sound… It is more accessible for sure, though still distant from the jam-band brilliance of ‘The Gears’.  Luckily, from then on, the tide begins to shift.

King Washington’s woozy and harmonious side is at its most obvious on the lovely ‘Nobody’s Journey’ where the band pitch their tight vocal style over various acoustic strums and something that sounds like a mellotron.  Influences from hipster favourites Bon Iver and Fleet Foxes jostle against the more classic parts of CSN&Y, while Tyson Kelly and co prove themselves able to get the best from relatively simple melodies.  Also among the band’s stronger tunes, the slightly downbeat and 60s inspired ‘The Cinema’ sounds not unlike The Hollies with a bigger punch.  Again the four performers’ harmonies are exemplary, but this number also boasts the album’s best arrangement. Beneath the guitars and tight vocals, a melancholy piano sitting at its centre and a big drum sound is on hand to give the biggest moments a suitable send off.  Those who enjoy the more thoughtful Hollies material – or perhaps even the 60s Bee Gees at the more maudlin – should find plenty to enjoy here.  This tune is definitely good enough to forgive the album’s few misfires.

In keeping with ‘The Overload’ being a mixed bag, ‘Don’t Expect My Love’ is a little oddball.  Louder than so much of KW’s best material it comes with live sounding guitars and medium funky riff, but then, the band take an unexpected turn and compliment this somewhat promising tune with harmony voices in occasional falsetto.  The end result sounds like Squeeze-enthusiasts PFR having a bit of a crisis.  It’s at once mildly disturbing and yet strangely compelling.  In the now typically eclectic spirit, the band follow this with ‘You’re a Cat’, a short hippy-ish ditty with vocals filtered in much the same way as The Beatles’ ‘Across The Universe’.  Stripping away the vocal effects and mellotrons and attempting to enjoy the song on a basic level, it’s certainly not one of the band’s best.  Still, as with ‘Don’t Expect My Love, kudos for them attempting to bring new ideas to the mix.

Although not as instantly appealing as ‘The Gears’, at least half of ‘The Overload’ really clicks after three or four spins, with a couple more tunes finding their place later.  The record is best approached knowing you’ll have to have to exercise a little patience from time to time – and between the guitars and grooves, you’ll find entertaining stuff…and just enough of the killer harmonies that shone previously, even if the material is sometimes inconsistent.