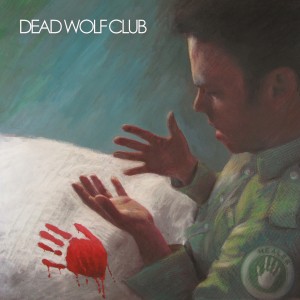 At the time of this EPs release, it barely feels like weeks have passed since Tintagel’s finest alternative rockers Dead Wolf Club released their second album, ‘RAR’.  …And yet, with boundless enthusiasm, they’ve found time between touring that release to record more new material.  Their first release for the independent Big Tea Records, most of ‘Healer’ represents their best material yet.  Within the grooves of the green and white twelve inches of plastic – or somewhere within the soul-less digital file, if you’re reading this and under thirty – DWC bring more howls of rage, more shimmering guitars and thunderous rhythms disguised by bursts of feedback, and for those who liked them previously, there’s much more to like here than ever.

Without even the courtesy of an intro, lead track ‘Flood’ crashes in without any time for the band to even warm up.  Serra’s mechanical drumming sets the tone for an almost gothy chunk of alternative rock, as John Othello’s yelled vocals lend a sense of urgency.  At first, the production makes his voice sound clearer than ever before, but by the track’s end, he can be found yelping uncontrollably under a barrage of cymbals.  While the core of the number utilises many of DWC’s previous tricks, there’s an unexpected melodic edge when the lead voice is counterbalanced by wordless vocal sounds from bassist Martha.  Gently breaking a little new ground while holding onto their beloved discordance, this track bodes well for the rest of the EP.

‘Melt’ harks back to the glorious days of late 80s goth and early 90s shoegaze with fantastic results.   At the point where the presence of a few lighter tones makes it seem as if this is cut out for a wider audience, the band’s uglier side surfaces – the main riff takes hold, its grubby tones underpinning a louder lead guitar subject to fuzz and distortion.  Underneath it all, Othello sounds like a man fighting against a claustrophobic sea of noise, at times barely even audible.  The result is something nearing classic Dead Wolf.  Taking a similar approach, ‘Metropolis’ shows off a tight band beneath its noisier flourishes: Martha’s bassline’s are strong, while the backbeat revels in crashing between the loud and quiet.  Meanwhile, the twin guitar assault from Othello and Alwin has a real edginess due to plenty of shrill sounding muted notes, showing a strong influence from Sonic Youth’s Thurston Moore…and hey, if you’re gonna be so heavily influenced, you may as well take from the best… While each of the numbers has something of worth, this is probably the track that existing DWC fans will connect with the most.

In some ways, the closing number ‘17’ is the EPs weakest.  It has the drive that sits at the centre of most great Dead Wolf tracks; Alwin’s lead guitars are sharp and occasionally atonal – his feedback and general squalls of noise are electrifying – and Martha’s bass runs have the necessary chops, but beyond that, it seems like filler.  Maybe it’s the lighter lead voice that gives it that flimsier edge…maybe it’s just relative to the previous material. Whatever, it doesn’t quite have the punch of a final statement that leaves the audience wanting more.  [This may just be a sequencing issue, of course – if you have mp3s, try them on shuffle…]

Just as parts of ‘RAR’ represented a progression from their debut, for DWC, ‘Healer’s four songs represent a bigger jump still.  Harder, sharper and occasionally cleaner, this EP shows a new maturity for the band, showing a huge increase in confidence, occasionally even commercial appeal but, thankfully, neither comes without sacrificing too much of their brilliant noise-rock rawness.   At least three of these tunes are essential listening for those already familiar with the band – and judging by the brilliance of ‘Metropolis’, they’re about to take things to the next level.