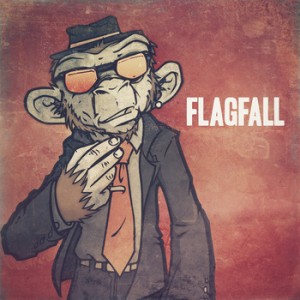 What to do with a bunch of guys from Sydney who claim to make music for misfits, drawn together via a love of The Black Keys and Kanye West?  Keep an open mind if you can…since this Australian quintet make some interesting music on their debut EP.  The four tunes are driven by obvious funk grooves but their eclectic sound draws from a wider palate, incorporating a hefty dose of pop, and elements of soul and rap for good measure.  The funk elements – seemingly high on their list of musical priorities – come courtesy of some rather large and warm sounding lead bass parts, which in turn are brought to life by a terrific production job by sometime John Butler producer Tony Buchen.  It is instantly obvious that these tunes have not been recorded “on the cheap”.

Throughout ‘Fingertips’, Flagfall indulge in some superb bass grooves (played by the apparently very talented Andrew Court), joined by dominant drum parts.  The guitars are used sparingly, occasionally crashing in with a huge chord, but more often than not choosing to add texture via reverbed twang in a near cinematic style.  Filling out any musical space, plenty of old school organ links the three other disparate elements while, over the top, a slightly distracting lead vocal mixes soulful long notes and occasional rap styled leanings – from a rockier perspective, influenced in equal parts by RHCP’s Anthony Kiedis and the moody vibes of CAKE’s John McCrea.  It’s a tune that takes a while to tune in to, but if you can, it’s a rewarding listen.  The rap styles that dominate during ‘Soldier’ are potentially responsible for making it the weakest of these four cuts, moving between a kind of slacker delivery and fast spoken word.  Assuming the rap parts aren’t your bag, look a little deeper: a harmony filled chorus is especially tuneful (a shame indeed Flagfall didn’t hold it back for use during a more enjoyable number, since frontman Nishan David clearly has a good voice), while the combination of lead bass work and sharp piano lines are particularly pleasing to the ear.

‘Running’ begins with a solid mix of upfront bass and piano, paving the way for a piece of classic pop.  Nishan fills the verses with a confident rap-style delivery – not unlike that found on tunes by cult US band 311 – before blossoming into full voice for a strong made for radio chorus.  If funky pop is your bag, this has the potential to become a favourite summer tune.  While the keys and guitars have a bigger presence (particularly during the closing bars, where guitarist James Kelly gets cut short just prior to breaking into a full lead break), there’s still a heavy leaning towards funk – and that’s something very welcome.  The EPs best track, ‘Death of Me’, has a harder edge than the other tunes with the bass taking a more staccato role.  This punchy tune, in places, has some classic sounding old-school beats, while flourishes of electric piano sound great – as does Nishan’s more aggressive vocal edge.  Despite so many enjoyable features, this is a tune that totally belongs to Kelly.  Cranking his guitar more than usual, he lays down some fine blues-edged licks in the process.

While Flagfall’s smorgasboard of sounds may not appeal to everyone, there are some very talented musicians waiting to be heard – and when they get it spot on, as they do during ‘Death of Me’ and ‘Running’, the results are more than enjoyable.  Listen/download via the widget below.