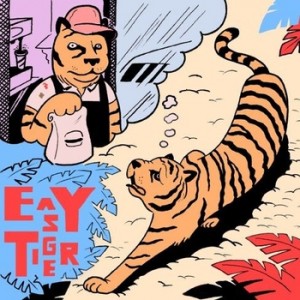 Back in the Autumn of 2011, Austin’s Easy Tiger released a two track single featuring well-constructed, Posies influenced alt-pop.  Literally weeks later, they returned with a new drummer and this four track EP of songs named after girls.  Although this second release has a slightly lighter tone at times, the better songs retain the spark of those prior recordings.

‘Martha’ starts things off nicely with a tune which fully capitalises on the potential of the previous release.  Completely emulating The Posies, the guitars chime, the rhythm section is just tight enough to make the band’s slightly garagey approach more appealing to a pop/rock audience, while the lead vocal carries a definite love for Jon Auer.  In under three minutes these Texan pop-rockers offer a chiming piece of power pop that’s about as good as the fuzzier end of the genre (Nada Surf, Readymade Breakup etc) gets.

For the other three tracks, things are a touch less shiny… During the second number ‘Emily’, the band tackles something akin to music by early sixties girl group, only then heavied up and played in a chunky mid-90s alt-rock fashion; the end result easily comparable to the largely forgotten Mother May I.  Musically, it’s mid pace could have ended up sounding bloated and sluggish, but thanks to an obvious liking of The Posies’ noisier material, Easy Tiger manage to pull it off well enough.  It’s during this track in particular that the biggest difference between this EP and the slightly earlier release becomes most apparent: much less time appears to have been spent on vocal arrangements than before.  Whereas their earlier pair of tunes (‘Gilded Heart’ especially) had a bucket’s worth of harmonies in a Posies style, most of the vocals on this tune are very flat.  Neither of the band’s vocalists [both called Mark – one with k, one with a c] are fantastic performers; they would rival Big Star or Teenage Fanclub in the harmony department, but one is better than the other…and while the vocal doesn’t kill the song, it’s doesn’t sound quite as airy or pop-laden as perhaps it should.

The spikier ‘Daisy’ uses the band’s discordant approach to a much better effect, as the guitars plough along with a slightly off-key approach hinting at Yo La Tengo, while a deliberately wayward vocal gets drenched with echo and reverb throughout.  No amount of echo can disguise the most waily and ugly notes, though, essentially leading to a performance you’ll either love or hate.  At least this slack vocal is in keeping with Easy, Tiger’s 90s alt-rock ethos – on The Posies’ ‘Before The Iceberg’ live LP, both Ken Stringfellow and Jon Auer sound absolutely shocking throughout – and without any good reason – thus killing any pop goodness from most of The Posies’ songs in the process.  Compared to that, the chaps from Easy Tiger have no real worries!

Perhaps the best track, ‘Julia’, has another huge Posies influence (circa ‘Amazing Disgrace’), with slightly downtuned vibes meshing with a more indie-pop oriented vocal line.  Not content with filling the near four minutes in such a structured style, Easy Tiger throw in a slightly funky riff between verses (one which potentially has more in common with a band like The Strokes in a tuneful mood), before adding a slower, trashier coda where the guitars rise to the fore.  This collision of styles can make the track appear far longer than it actually is, but at least it shows off most of the bands range.

Overall, this self-titled EP could never be considered essential.  The tunes are often good enough – and when indulging in multi-layered guitar parts (as per ‘Emily’) they sound even better – but for some listeners, the flat vocal deliveries may be somewhat of a drawback.  That said, despite the rough around the edges moments, fans of earlier Teenage Fanclub, The Posies and, perhaps, even the more tuneful parts of Yo La Tengo et al may find some enjoyment here.

Both this EP and the band’s prior single can be downloaded absolutely free from the Easy Tiger Bandcamp page.  You can also hear their two track xmas single, too, if you’re into that sort of thing.  Just follow the link below to go directly to the Texan Easy Tiger page, as opposed to the various other same-named bands on the site.