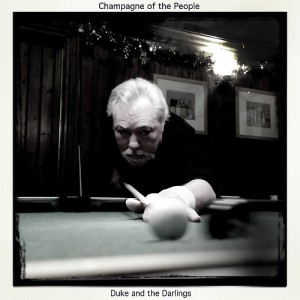 This second EP from Manchester-based Duke and the Darlings was recorded live in the studio and its relative rawness gives the material a natural energy and edginess.  After recovering from the initial shock of something sounding like a blown speaker, there are four well played numbers waiting to be discovered from beneath the general fuzziness.

Going all out straight away, ‘Love’s Labour’s Lost’ kicks off like with a guitar tone that sounds like a demo of Hendrix’s recording of Dylan’s ‘All Along The Watchtower’. This blues slant seems brief at first, since once the vocals appear, things drop into a garagey indie rock mood. The lead voice surprisingly clean considering the general lo-fi fuzziness of the recording.  The classic sounding blues-rock motif returns as the instrumental link between the verses – a wise move – while the chorus is slightly different again; it’s relative sludginess shows a gentle influence from the stoner rock movement.  This blend of styles is a bit patched together, but the variety of moods – and presence of a strong, simple hook – is just enough to ensure you’ll keep listening to see what else is just over the horizon.  There’s nothing quite as striking as ‘Labours’over that horizon, but the remaining tunes are certainly worth a listen.

Less 70s rock, more 90s indie, ‘Whiter Than White’ comes with a bounciness, but instead of opting for a typical indie radio-friendliness, The Darlings dress the chorus down with a chugging guitar straight out of the Josh Homme school of fuzz.  Sure, they don’t have the kind of budget awarded to Mr Homme – but if they did, they might just make better use of it.  Based on the material here, they certainly don’t insist on dragging three minute songs out to twice their natural length just because they can… Simplicity is key as the band weave a strong tune around a one-line chorus.  Often, basic repetition of one line can lead to dullness, but somehow, this works well for The Darlings and the repeated refrain of “You were always looking for answers” sticks in the head.  Whereas the first two numbers worked around a reasonable amount of bottom end, ‘Don’t Need To’ appears far more spacious with a ringing lead guitar taking the weight of the melody, while the lead vocal is as naturalistic – and English – as ever.  Despite a slight shift in sound, this number shows Duke and the Darlings appearing to be equally as comfortable in a more melodic setting, this time utilising a strong, if basic chord progression.

Closing this EP, ‘Walk Away’ throws out a few muted chords by way of an intro before diving headlong into some classic sounding indie rock – a bottom end, grungy sound cutting through the more dominant jangly fare.  Like ‘Don’t Need To’, the lyrics can seem a touch repetitive, but hook-wise, it’s just about there…and tune-wise, it’s strong with plenty of interplay between the rhythm guitars and drums. …And then, just as it feels as if there’s a climax to finish, everything stops dead…leaving the listener in premature silence to contemplate what it is they’ve just heard.

The muddy edges may make The Darlings’ brand of retro fuzz/indie rock a little too claustrophobic for some listeners, but if you can get past that, this EP has plenty to give.  Duke and The Darlings seemingly have very strong ideas regarding their organic sound even at this early stage and ‘Champagne of the People’ – and ‘Love’s Labour’s Lost’ especially – is the sound of a fledgling band potentially on their way to bigger and better things.