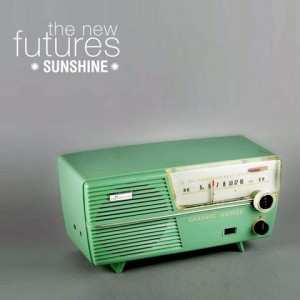 By the close of the first half of 2013, with the once great Train having derailed themselves into vacuous pop oblivion and Maroon 5 still churning out horribly autotuned music guaranteed to annoy all but the most tolerant, the field seemed more open than ever for a new adult oriented rock/pop band to impress the world’s radio listeners.  Step forward The New Futures – a four piece band whose debut EP takes its cue from similar kinds of commercially savvy bands from the 90s and beyond – and with nary an autotune knob or ukulele in sight, they’re already headed in the right direction!

Lead single ‘Sunshine’ at first rocks out a guitar line that’s slightly grubby in intent, but very commercial in result.  This appears sporadically throughout the number (most obviously during the chorus), while a more commercial reggae-pop bent fills the verses.  The push and pull between a Rob Thomas influenced pop sound and the roots of a retro bar band make The New Futures almost instantly appealing in a radio sense.  Factor in a slightly noisier guitar solo and a brief wandering instrumental bridge  – not to mention a fairly well executed wordless vocal line fleshing out that aforementioned chorus – and it’s a number with a bit of everything.  It’s definitely a good way to begin this release, but even so, this isn’t even The New Futures’ strongest offering.  That accolade would belong to ‘Ocean’ – a slightly poppier affair, but a number that shows off the full spectrum of this bands talents.   Sammy J. Riddle’s voice is somewhat of an acquired taste, but there’s no denying that his delivery appears strong, as he curls every syllable around this rather nifty rock tune.  With a rudimentary guitar presence throughout, it’s the other embellishments that make it so compelling.  In addition to a well-rounded bass line, drummer Robert Ray Baker Jr carries most of the groove as he rattles off a backbeat with a bouncy and distinctly jazzy flourish.  With something that seems content to settle somewhere between Matchbox Twenty and Maroon 5 (albeit without the nasty, nasty autotuned bits), The New Futures would already have a winning combination of pop/rock on their hands here, but there’s another brilliant moment up their collective sleeve when they wheel out a slightly seedy baritone sax solo.  …What’s more, they make it fit with everything else, making it sound like the most natural thing in the world.

The mid-paced and slightly moody ‘My Own Crime’ appears to pull the best parts from both songs from which to build (though sadly, there’s no sax).  An understated back beat leads the way – again with strong moments of flair – whilst a pop sensibility brings a slickness in that’s in a good contrast to a few tougher guitars poking themselves in near the end.  Unlike the previous numbers, however, this tune lacks that extra something – mostly a proper hook – to make it quite as memorable.  Even so, there’s some good playing here from all concerned.  Rocking out a tad more, ‘When I Think of Love’ has an influence from the noisier end of nineties power pop (a tiniest pinch of Weezer with a strong debt to the infuriatingly inconsistent Lit) and that proves to be a sound that works so well for these guys.  Gustavo Carmo’s slightly overdriven guitar riff has attitude without ever sacrificing melody, while Riddle stretches his voice at first, before finding just the right tone to make this another potential radio-friendly winner.   Again, it’s not as instantly lovable as ‘Ocean’, but is a strong contender for ‘Radioactive’s second best tune.

The EP’s other number, ‘Story’ finds the band in a maudlin frame of mind.  Set against a simple strummed acoustic guitar, Riddle’s voice isn’t quite as palatable as perhaps it could be, and yet, this starker backdrop proves that his sense of presence never fades.  The best moments come courtesy of a few piano chords that have a main aim of rounding out the sound without ever overshadowing the song.  While they could have adopted a bigger role without swamping the guitar part, they do a top job in making ‘Story’ sound far deeper than it actually is.  Again, this isn’t The New Futures’ most appealing tune – how could it be when ‘Ocean’ is still a very sharp memory? – but all told, it captures the more low key aspects of the band’s music in a very succinct manner.

Overall, The New Futures sound isn’t always as consistent as their level of drive and enthusiasm might suggest, but even so, these five numbers add up to make an EP that ought to be enjoyable for so many rock/pop/adult pop fans.  That’s partly to do with a couple of stand-out moments, but it owes a lot to the fact that when they’re on form, this young band often knows how to arrange a tune to get the most from its constituent parts.