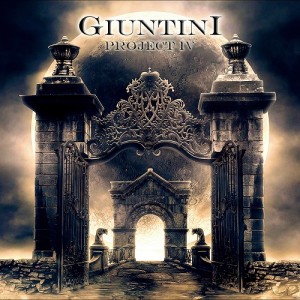 An obvious standout track, ‘Saint or Sinner’ finds Martin chewing his way through old fashioned rock clichés in a way that may only be bettered by a few, while Mr Giuntini throws himself into an energetic guitar riff that bears more than a passing resemblance in places to Yngwie Malmsteen tackling the Judas Priest classic ‘Rapid Fire’.  Despite such preferences for the outdated, the tune fares well enough, especially with bassist Fulvio Gaslini churning out an equally thunderous riff, toughening up this band considerably.

At a more typical slower pace, ‘Born In The Underworld’ shows off Mr Giuntini’s tendencies for wanting to be Tony Iommi circa 1988, even to the point where it sounds like this tune might just explode into ‘The Headless Cross’ just before the chorus.  All things considered, this is fine enough, and given his past track record, this more mid-paced approach suits Martin well, even though his voice now belies the passing years.  As the tune progresses, you may even find yourselves beginning to wonder if Martin is consciously aware of the slight Dio-esque twangs in part of his performance…?   Like ‘Saint or Sinner’, this is another well-executed rocker, but you’ll find nothing new – or, indeed, challenging – here.  On ‘Shadow of the Stone’ Giuntini explores sounds that echo the hardest edges of Ritchie Blackmore’s once-brilliant grandeur; one of its main riffs hints at the Rainbow classic ‘Eyes of the Word’, while parts of the solo and a few sweeping leads also bear noticeable comparisons to that far superperior axe-man.  Martin, meanwhile, delivers what is definitely one of his stronger performances – there’s no effort at he hits booming, slightly overblown notes.

Elsewhere, things are less impressive.  While some may find the “see how many notes I can hit” approach of ‘The Rise & Fall of Barry Lyndon’ entertaining, it’s a sad fact that rather like Axel Rudi Pell and Yngwie Malmsteen – his two key influences on this instrumental workout – Guintini handles his instrument with skill and and an obviously high level of dexterity, but absolutely no emotion.  Technically brilliant it may be, but it does nothing to differentiate itself from any of the other seven thousand neo-classical wankfests out there.  While reasonable vehicles for Tony Martin’s voice – a good enough voice still, but far from the best – ‘Cured’ and ‘How The Story Ends’ are a pair of tunes which tip the hat to his Sabbath years while tinting them with a little Euro-flair.  Neither are bad, especially if you’re looking for entertainment purely for entertainment’s sake, but in reality they are ultimately disposable rock tunes.

More melodic than some of Giundini’s work, ‘Truth Never Lies’ brings a slightly tinge of AOR to the hard rock base.  A basic drum line is all that’s required here and Fulvio Gaslini’s bass maintains a solid presence.  As is often the case, the whole thing is geared towards a couple of guitar solos – and here, Giuntini shreds like a man equally influenced by ‘Odyssey’-era Malmsteen and a handful of other Euro-rockers, straddling that fine line between melody and showboating.  Those factors ought to have made this number more memorable, but it ultimately fails thanks to a one line chorus.  Such a waste; if only Giuntini and Martin could’ve injected this kind of melody into one of their half-decent choruses present elsewhere…

Overall, it’s fair to say these musicians are solid players and Martin a man of experience, but in the bigger picture, the two things are just not quite enough to make ‘IV’ consistently impressive. Much like those releases pairing Tony Martin with Dario Mollo, you’ll find three, maybe four, numbers of enjoyable – albeit very traditional sounding – rock music within, but not much more. That may well make ‘IV’ worth checking out if you’ve got time on your hands, but for most, despite best intentions all round, this album is unlikely to ever become a favourite.