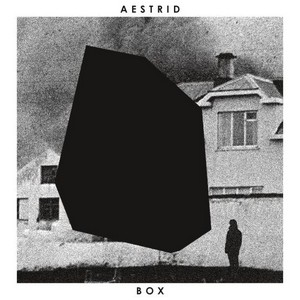 With a huge set of influences from 80s new wave, synth rock (more specifically the more commercial end of Krautrock) and more than a touch of 80s goth and 90s alternative for good measure, this second album from Dutch electronica/alt-rock band Aestrid represents the sound of a band reaching early maturity.  Although its base sounds will probably sound familiar to listeners over a certain age, the albums eleven songs blend dense sounds with a sense of optimism in a way that is almost magical.

With a layer of keyboards droning across its epic five minutes, ‘Dover’ is a very strong opener.  Climbing from within the sound, clean guitars chime while the keys swirl – it is particularly old school and slightly gothy in intent, yet manages to sound far more twenty-first century in its execution.  While similar bands from the 80s would likely rely on a programmed drum to lend things that extra-detached feeling, it’s to Aestrid’s credit they opt for a real drum sound, and that goes some way to making their party retro tunes feel more at home in the twenty-first century.  From behind his kit, Ray Kornet pounds out a solid beat, rarely breaking beyond a slow marking of time, but its a style which hammers home the intensity within this particular number.   Giving the tune a stronger melodic identity, vocalist Bo Menning adopts a fey tone, somewhere between the best approaches of Placebo’s Brian Molko and Polyphonic Spree’s Tim DeLaughter combined.  This makes ‘Dover’s goth-pop intensity surprisingly accessible – and if any of these musical influences have ever spoken to you, you’ll love this – and ‘Box’ is an album likely to bring further enjoyment during its ten other tracks.

The doomy ‘Telemark’ is a definite highlight, portraying gothic 80s influences aplenty.  As the tune crawls along, Jurriaan Sielken cranks out a slightly ominous bass line and the rest of the band crash in on the hard beats.  The overall vibe is that of a tune left over from the Cure’s similarly bleak ‘Pornography’ sessions, although the haunting vocals present here are a far cry from Robert Smith’s anguished and tortured wails on that disc. A joy for those who revel in the downbeat, the mid section swells in sound (though remains constantly funereal in pace), with the sound of retro keyboards filling the space.  At the point where the track reaches its natural end, the band plough forward ever more, teasing the listener with another minute and a half’s worth of ambient drones.  Paying their own small tribute to the age of the cold and detached analogue keyboards of the Krautrock scene,  this sense of minimalism strongly hints that someone within Aestrid’s ranks is fond of Tangerine Dream’s mid-70s output.  Almost at the other end of the scale, ‘Im Eizelgang’ has a more modern influence, at times hinting at the likes of The Killers, with Lyckle De Jong’s bright keyboard sound cutting through the wall of sound intermittently.  For those who like a little electronica within their music, the keys here should impress, since their simple tune lifts an otherwise darker piece.

As its title suggests, ‘Fair Start – Fire Hill’ is a number comprised of two disctinctly different parts.  The first presents one of the album’s (rare) weak links as Menning cries his vocal in gentle falsetto over an equally gently arranged piano.  The fragility of this is mildly unsettling, but luckily, this cracked interlude is merely just that.  Before too long, the band careen into an upbeat arrangement which showcases Sielken’s bass sound (influenced by a classic indie-rock approach) played against Kornet’s unwavering drum style.  The piece isn’t among ‘Box’s more inventive – in fact, the bass sound and vocal style are guaranteed to invite comparisons with Placebo’s best selling debut record (at the time of this release, a staggering seventeen years old) – but that doesn’t make it bad; in fact, despite not being among Aestrid’s more striking works, the end result is very enjoyable.

With even more of an eighties persuasion, the wall of sound which opens the title cut has traces of New Order meeting with a hefty dose of ‘Disintegration’-era Cure.  As the verses unfold and Menning’s vocal weaves across a much more serene arrangement with guitars chiming, the band take their key influences and create something more distinctly theirs.  The sound of crashing drums against a blanket of synths sounds classic in a way that’ll never get old.  During the ambling ‘Quitsville Trash’, Aestrid mix programmed loops and bass sounds in a very understated way. Although eventually they revert to type with a huge multi-layered climax, the first half of this tune is just lovely, since it successfully manages to create a strong atmosphere from relatively little. The way the vocal carries almost everything against a programmed drum, while occasional bass sounds creep in is simple yet effective, as if Norway’s Team Me decided to re-work something from The Blue Nile’s Linn drum obsessed ‘Hats’ in their own image.

This is so good: ‘Box’ is a record that manages to be dark yet beautiful, at once dense yet surprisingly spacious.  There’s a sound that’s so familiar at its core, but despite the moments most obviously inspired by early Placebo, it does not always sound as if it’s coming from a band content to just emulate the indie/goth/shoegaze sounds of the past.  Like Pains of Being Pure at Heart’s excellent 2011 disc ‘Belong’, this is an album some will treasure…and rightly so.