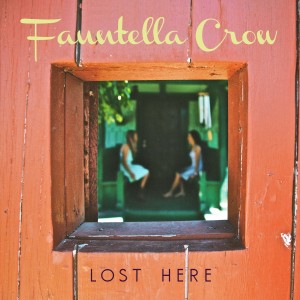 Fauntella Crow is a singer-songwriter/pop/folk duo from Los Angeles comprising of vocalist/pianist Sunday Lane and violinist/vocalist Jessy Green.  Lane, a classically trained pianist makes her first huge steps into the music world at large with this project, while Green has an impressive resume having previously worked with Glen Campbell, Wilco and alongside the legendary Dave Grohl in his Sound City Players (a project also featuring Rick Springfield, Stevie Nicks and other household names).  Fauntella Crow first came to the attention of many when they appeared at the 2013 SXSW Festival.

As far as a self-financed recording from an unsigned act is concerned, the overall sound is of this debut EP is bright, hugely professional and gives the impression that it didn’t come together on a meagre budget.  While the sound is sharp – mixing folk elements with a huge pop dose – the songs themselves aren’t always blessed with instant hooks, often taking a while to sink in.

‘Delicate’ begins with a dark tone courtesy of a slightly sinister violin, before he weight of the tune comes via a few hard piano chords.  At the point where it seems as if this may resemble one of the more rambling pieces by Tori Amos, Sunday Lane begins to sing – and her stylised folksy vocal recalls the lilting and occasionally slurred delivery of Irish singer-songwriter Lisa Hannigan.  It’s a quirky, sometimes even vaguely odd vocal style, but suits the arrangement well enough, especially once programmed loops and a real drum add muscle to the poppy arrangement. Particularly enjoyable is the tracks instrumental interlude dropping in just before the end:  the piano dances beneath slightly droning string work; the contrast between dark sounds and buoyancy really catches the ear and imagination.  This push and pull between folk instrumentation, pop chorus and wistful air is typical of the rest of this release and it’s a sound that works well for the duo.  Chosen as the EP’s flagship track, ‘Just Try’ comes with a positive message, stronger piano accompaniment and a crying voice.  The verse builds slowly with the piano eventually joined by violin and handclaps – the result falling somewhere between Hannigan and Alice & The Glass Lake.  After the slow build up, you’d expect everything to explode with a giant sized chorus, but Fauntella Bass prefer instead to deliver their hook gently – and repetitively – over a bigger set of strings.  It still works as a reasonable piece of adult pop, though not necessarily in the most predictable fashion.

Perhaps more so than on the first two tracks, during ‘Grow’, Lane’s mumbling and slightly drawling voice becomes more of an acquired taste than ever before.  While the music still displays FC’s trademark sound of homespun roots and pop, her voice is laid back to the point some of the lyrics are in danger of being inaudible.  Despite this, the two performers harmonise well and even though some of Lane’s chosen registers appear rather high, the high moments are balanced excellently by deep electronic bass sounds a drum loop and, although not as busy, there are hints of UK chamber pop band Sharks Took The Rest in the overall sound.  It may be a cliché, but ‘Grow’ is a definite grower…  In contrast with the upbeat pop elements of this EP, the slow and ambling ‘Give Myself Away’ presents something that pulls influences from pure pop mixed with a little soul, again dressed with busts of folkish violin.  The slow pace and equally slow voice are a good compliment for each other, but the song…the song just isn’t very interesting.  It’s all heart-string pulling leading to nothing really of any long-term interest.  A real rhythm section might have helped…

The title cut starts off with a couple of minutes worth of close harmony singing over cinematic piano chords, the repetition of the line “We could get lost here” taking on a near dream-like presence.  The addition of a bass guitar gives the sense of a much broader musical palette despite those bottom end notes only appearing sporadically.  As things slowly wind to a halt, the blend of those bass sounds with violin and piano create something soft but magical…and Lane’s breathy voice – even with its stylised approach – sounds stronger here than ever before.  With the tone of a piece of music destined to play out under a film scene, fans of Sarah McLachlan may find something of interest here.

Previous associations with alt-country and rootsy artists may tempt many listeners to categorise Fauntella Crow within folk based or Americana subgenres, but these five songs often display more of a leaning towards very sophisticated and laid back adult pop than anything else.  Whichever way you care to pigeonhole it though, there’s no escaping the fact that this duo’s approach to song craft can often be rather fine…even if the vocals won’t always suit everyone.