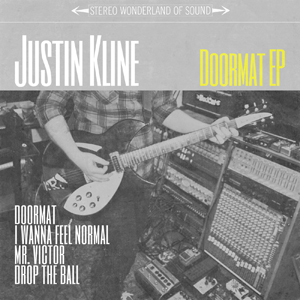 2013’s ‘Doormat EP’ is a more than worthy successor to his ‘Six Songs’ and ‘Triangle’ EPs, returning to the full-on pop sound with which he first made his mark…but digging deeper, beyond the cheery facade, on a couple of the songs he still paints a self-questioning portrait.  In this respect, ‘Doormat’ presents both sides of Kline’s artistic muse.   Never is this more obvious than on the title cut, where he portrays someone constantly feeling stepped on and used up (“a sponge to all your tears…I’m your doormat, baby”).  Ensuring this comes with none of the bleakness that coloured those ‘Cabin Fever’ moments, the musical arrangement is tough, driven by a great guitar line, putting Kline firmly in the early Weezer/Wheatus camp.  Like the work of Lyn Saga, the influences are more than obvious, but Kline’s distinctive vocal tones combined with a sense of vigour sets this tune apart from most of Rivers Cuomo’s overrated post-‘Green’ mumblings.

There’s no drop in quality for the second number ‘I Wanna Feel Normal’. Although far removed from absolute self-pity, as its title suggests, it doesn’t have the cheeriest set of lyrics.  Musically, Kline matches this paean to self-improvement with a jaunty arrangement where electric pianos lay down a one-two march topped by chiming guitars.  The musical clincher comes from the mid section, where with a quickening of pace and a lightening of spirit, he taps into something almost worthy of the mighty Jellyfish.  Although brief, this presents power pop at its finest – the kind of music which lovers of Mark Bacino’s ‘Popjob LP’ should not miss.  Harmony drenched and sugary pop is very much the order for ‘Mr Victor’, a tune that sounds like a leftover from Kline’s ‘Triangle’ sessions.  While the strong hook, killer harmonies and a tinkling xylophone pull together to create something tried and tested, once heard, you’ll be singing it for hours.

The last of the four songs, ‘Drop The Ball’ is an absolute belter – perhaps even the best offering in Kline’s catalogue to date.  The guitars attack with a new wave sensibility, while the exceptionally hooky chorus makes sure it has maximum impact via stops, staccato riffs and simple repetition.  Tougher than most of Kline’s solo pop experiments, though not as gritty as his Origami Hologram side project, he fuses seventies bubblegum wonderment with nineties power pop effortlessly here.  Of particular note, his choice of blending electric and acoustic instruments creates a wonderful sound – a sound so pure that even a relatively raucous lead break fails to set it off balance.  Combined with Kline’s knack for a chorus, this ought to reel in listeners raised on The Romantics, Rubinoos and Shoes…and keep them listening.

While the world is more than ready for Kline to release a full length album of electric pop to counterbalance ‘Cabin Fever Songs’, any music at all is welcome and this EP adds a few more gems to his legacy of pop.  For those who loved ‘Triangle’, ‘Doormat’ presents another unmissable (if brief) journey into his precarious world of ruminating lyrical themes juxtaposed with optimistic and sun-filled tunes.