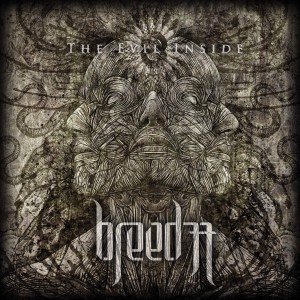 The early releases by Gibraltarian alt-rockers Breed77 (a name they choose to pronounce with a ‘seven-seven’) are very much workman-like affairs, often derivative of many US post-grunge/alternative rock bands. Even with hints of flamenco music colouring their sound, the song writing on those records often lacks the spark needed to make them stand out from the crowd.

On their 2013 release ‘The Evil Inside’, not much has changed, with B77 still persisting with trotting out very familiar, downtuned riffs.  While the band clearly feels they have an affinity with the post-grunge sound, a great deal of the time they sound like a band going through the motions.  In fact, it’s interesting that their one foray into harder and faster (ie: less grungy) territory provides the album’s one genuinely bright spot: ‘2Face’, a full-on romp with distorted vocals, allows drummer Andre Joyzi to cut loose with a bass drum pedal while guitarists Danny Felice and Pedro Caparros Lopez indulge in a solo spot with maximum shred factor.   A slower coda settles into a chugging riff paying homage to more of the more typical B77 sounds, but overall, this is a great track showing off most of the band’s talents.  …And it is clear that they do have talent, it’s just on the rest of this disc, yet again, their talent manifests in a not particularly inventive way; when it comes to arrangements, Breed77 are pedestrian.  It’s all very well being able to capture a sound fairly well, but it’s far more important to have memorable material – and for the most part, Breed77’s songs are just a bit dull.  At best, the mood beyond ‘2Face’ is one of a more than competent support band at a gig.  After thirteen years and five albums under their belt, surely they ought to be aiming a bit higher?

Relatively enjoyable on the musical front, ‘Drown’ delivers a punch via a simple riff, underpinned by a rattling bass part placed high in the mix.  It’s a pity that riff wasn’t complimented by a better song, or by a particularly good vocal – Isola’s slightly scratchy delivery mars anything half decent.  Likewise, ‘Broken Pieces’ employs some nifty lead and a brilliantly meaty riff, but while it’s an enjoyable number which ticks all the boxes musically, as with most of ‘The Evil Inside’, B77 totally miss out on that magical hook necessary to make it memorable in the long term.

Sadly, beyond that, there’s really not too much to get excited about here.  Occasionally, you’ll find something which makes a brief impression – as with ‘Low’s simple, monolithic and domineering chug – but half the time, this band are just rattling out rather predictable, gloomy sounds. There are a couple of  lighter moments – as per the verses of ‘Higher’ – but light and shade doesn’t play a huge role within the band’s sound; that said, even when playing with more subtlety, these guys lack that necessary charm found on similar outings by their US peers.

Even taking on board the slight improvement in B77’s material on this release, you may still find yourself wondering why you’re bothering, when you could be listening to any number of similar sounding, but superior records.  Breed77 are far from being able to stand beside the likes of Fuel or Creed with regard to having a huge post-grunge appeal. [If there’s anyone in the UK who still doesn’t own Fuel’s 1998 album ‘Sunburn’, go and buy it ASAP].  While they have the potential to be good musicians, the general mood here is one of a band not quite yet ready for the big time…and after so long, that’s rather unfortunate.