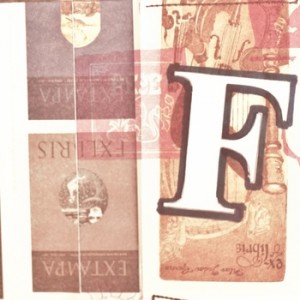 Frantzeska is a three piece punk/alternative rock band from Bilbao, Spain. ‘BesauriOn!’ is their second release and although it may be half the length of their prior record, stylistically, they branch out twice as far.  In just five numbers and with the help of four friends, they show off a multitude of styles and influences, from pure punk, to ska/reggae, funk, with touches of pop and even lounge jazz.

Showing the band at their most direct, ‘Degenerization’ is a street punk belter, driven by two timeless punk refrains – a barrage of whoas and the occasional “lets go!”, both of which lend huge amounts of weight to its overall appeal.  Although never entirely unrelenting, the riffs come at a reasonable pace – fast enough for this to be done in roughly ninety seconds without the listener feeling short-changed.  Meanwhile, the lead vocal – bearing a passing resemblance to both Against All Authority’s Danny Lore and Zach Howe of the much-missed Falling Sickness – possesses a similar amount of edginess, something reinforced by the lyrics being in Spanish, shifting focus even further to a hard-edged sound.  While there’s a time and place for unashamed punky belters, the band’s levels of energy of this number get used to far greater effect during  ‘La Kaja Gris’.  Firstly, this tune proving Frantzeska much better musicians, as this is very tight indeed, driven by a hard ska rhythm.  Secondly, and more importantly, this possesses a brilliantly busy bassline, guaranteed to get those knees up and skanking.  There may not be the compliment of brass such a ska driven tune deserves, but that bassline is almost enough alone to carry the weight of the number.  Again, the lyrics not being in English doesn’t necessarily detract from the mood, since a few well placed whoas are on hand to lend more of a universal appeal.

Taking a mellow moment, ‘No3’ shifts away from the bands core punk/ska influences and presents a laid back tune with clean toned, near jazzy guitars.  The vocal follows suit, twisting and curling, never raising above a slight sneer.  It doesn’t do much within a near four minute time frame – and as such, is likely to be a skipper after a few plays – but it’s inclusion here is incredibly important, in that, perhaps more than any of the tunes on their debut release ‘F’, it shows Frantzeska to have a much broader range of their talents than first appears.  Likewise ‘Krimen’ presents a relatively complex blend of jazz, funk and a touch of reggae, resulting in the EP’s most interesting number. Between a vocal which focuses far more on melodies and a couple of off-centre rhythms thrown in for good measure, this shows excellent interplay between the musicians, while the music is strong enough to make the listener forget (at least from time to time) that the lyric is not in English. ‘Sustraia’ explores different musical territory again, as clanging guitars, yelping voices and occasional stops bear a passing resemblance to an early Pixies number played by a particularly raucous garage band.  Enjoyable, but not essential, this brings ‘BesauriOn!’ to a somewhat jarring and abrupt close.

Regardless of your native tongue, this EP features some intermittently enjoyable music – from the rhythm section in particular, and especially during ‘Krimen’.  It might not be the best entry point for those looking for punk thrills though; that audience should take the debut record (‘F’) for a spin first.