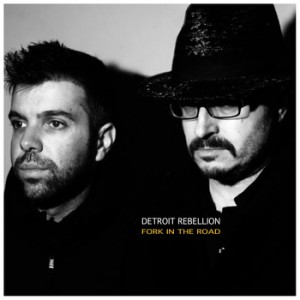 The relatively upbeat ‘Fork In The Road’ combines a shuffling drum part laying down the groove, complimented by de-tuned slide guitar.  The overall vibe is loose and very natural, with Jeff Toste (also of Laurels) adopting a hushed vocal style which he combines with a tuneful whistle.  Eventually, the vocal takes second place to Mikey Lams’s drum part; soon, the solid combination of downtuned slide guitar and almost locomotive drumming becomes captivating.  Tapping into a bluesier thang, ‘Dirty Boots’ slows things down and a looser rhythm backs a reverbed guitar, often offering just singular plucked notes.  A dirtier groove cuts through for the chorus, but while this represents the loudest end of the duo’s music, there’s still a stronger sense of atmosphere than some blues duos offer.

‘Fire, Devil and Desire’ combines the best elements of the previous two numbers, driven by a driving blues rock riff. Similar in pace and attitude to The Doors’ ‘Roadhouse Blues’, only reinterpreted by a lo-fi genius, this is the Rebellion at perhaps their most user-friendly.   Best of all, ‘Nothing To Lose’ wins through an very minimalist approach.  The guitar twangs over a blues/jazz drum – again with a natural live sound – while the soft but oddly sinister voice is drenched in reverb.  Although not as tight, there’s the tiniest spirit of Mark Sandman’s pre-Morphine band Treat Her Right echoing through the piece – a passing influence which is certainly welcome –as the duo bring a sense of mild threat without ever resorting to aggression or loudness of any kind.

Detroit Rebellion could have cut a niche tackling a more forceful blues groove like their peers, but that’d be easy – perhaps a bit too easy.  Instead, by leaving the listener with relatively dour tunes – parting with the most downbeat, making that the lasting memory as the music fades – this EP soon uncovers its own sense of spooky ’tude.  …And if you dig that, there’s music here with which they’ll certainly pull you in and (hopefully) keep you listening.