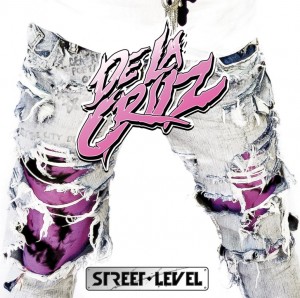 There have been some great bands exported from Australisia over the decades.  Crowded House have blessed us with near-perfect and often very thoughtful pop; Cold Chisel raised the bar for no-nonsense rock ‘n’ roll; Peter Garrett and Midnight Oil proved – perhaps more than any of their American counterparts – that hard rock and politics can go hand in hand and still shift millions of units.  Something UK and US audiences rarely associated with the southern hemispheres is sleaze/glam rock.  Frontiers signings De La Cruz are here to help fly that flag.

This debut full-length release shows off some potentially talented musicians.  Throughout the record, De La Cruz emulate their 80s heroes with gusto, with more than a hearty appreciation for 1987-89 era Mötley Crüe, with Casey Jones and Rory Joy in particular in the driving seat with some hard-edged guitar licks.  Tempering the Crüe trashiness comes a world of filtered Def Leppard-esque vocals – vocals that, at least some of the time, add a greater sense of melody.

Kicking off at their toughest, ‘Street Level’ features a reverbed drum, a hard-hitting riff and slightly squawky vocals, all of which tips the hat to Zan Clan and many glam bands of the late 80s.  From this more than solid base, both guitarists work magic, eventually delivering shredding solos that appear too sharp edged even for De La Cruz’s retro-sleaze.  Musically, if glam is your bag, this is fine.  But what’s that?  Do the band really think that repeating the words ‘street level’ several times actually passes as a chorus?  Even the dumbest, coked-up rock stars of glam’s heyday always managed more than that…at their most half-arsed.   Likewise, in principle, ‘Girls Go Wild’ and ‘Turn It Up’ should’ve been okay in a Mötley style, but they’re also killed by one line choruses.

For ‘Legions of Love’, the focus shifts from Mötley-wannabes to blatent Def Leppard-isms.  With the slight musical shift, there’s always a glimmer of hope that the song writing will improve, but both ‘Legions of Love’ and ‘Gimme Love’ suffer at the hand of (near) one-line dumbness.  Again, this is a great pity, since the musicians turn in decent performances throughout.   This band should have hired a lyricist.  At almost every turn, they manage to kill any good vibes with lazy song writing.  Yes, glam and sleaze is never meant to intellectual, but surely even the most undemanding rock fan deserves more than one line choruses.  With such a trashy approach,  you might get away with one or two of these, but to pretty much fill the first half of this record with them is bordering on taking the piss.

Thanks to various attempts at stretching choruses to at least two different lines and more exposure given to the band’s much-loved Def Leppard-esque vocals, the second half of this debut shows a marked improvement.  ‘Dreaming’ utilizes some unashamed AOR keyboards, which combined with a tough guitar calls to mind Heaven’s Edge before the vocal brings things more into a radio-friendly hair-metal territory.  It’s a shame that Roxxi Catalano’s voice had to be so heavily filtered, but even that doesn’t mar the enjoyment too much.  The verses pack a driving punch, while the chorus comes across like an early Warrant tune re-imagined by Def Leppard.  As before, the guitarists are on hand to fill the instrumental break with well-executed sweeping, all proving De La Cruz have great potential.  Why they waited until halfway through the album to unleash that full potential is anyone’s guess.  After all, the less patient have already long stopped listening by this point.

‘Invincible’ also brings enjoyable moments in its intro thanks to some clean-toned guitar work, but just as you’re expecting things to take a Def Leppard ‘Love Bites’ route, things toughen up considerably.  With a solid back beat and riff to match, De La Cruz embark on a number which fuses the best elements of Dokken and the Leps.  Against the odds, they manage to pull the best from a not especially memorable hook thanks to some multi-tracked voices.  Those voices eventually go some way towards rescuing this number, since Catalano doesn’t sound especially strong in his role of lead vocalist here.  Joining ‘Dreaming’ as the album’s only other genuinely great tune, ‘Set The Night’ brings the band’s best elements to the fore: the lead vocal is scratchy but has a sense of sleaze-rock charm, while the music strikes a fine balance between power and melody; as before, it’s the shameless Leppard backing vocals which are the real clincher.

To finish, semi-acoustic ballad ‘Shine’ includes far softer vocals and melodies all round – so much so it sounds like the work of a completely different band.  Although the tune is okay and the vocals are well suited to this more restrained approach, it doesn’t sound heartfelt or genuine.  It’s as if the band have finished recording their album and then remembered how Poison’s ‘Every Rose Has Its Thorn’ and Warrant’s ‘Heaven’ have survived the decades and, perhaps, De La Cruz need a ballad too.  Placing it at the end of the album just makes it feel even more like an afterthought.

Since De La Cruz showcases two gifted shredders in the guitar department and a vocalist who possesses a reasonable amount of edge (if not always actual tune), it’s a shame that aside from ‘Dreaming’ and ‘Set The Night’, no songs really show off the band’s fullest potential.  Fewer one-line choruses would have been a big help, but it still wouldn’t stop even the best parts of this record feeling like a mere imitation of great glam records of the 1980s.  Despite initial potential, this disc is only for the easily pleased.