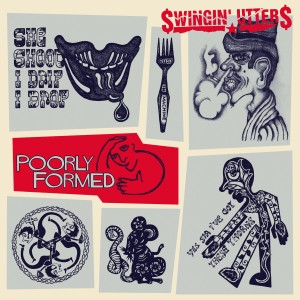 Branching out from their street punk beginnings, over the course of several albums, Swingin’ Utters have constantly evolved.  They may have become more commercial with the passing years, but if 2013’s ‘Poorly Formed’ tells us anything, it is that vocalist Johnny Bonnel and company know how to pen potentially very memorable tunes. Crashing through fourteen tracks in approximately half an hour, a couple of one-line choruses aside, ‘Poorly Formed’ is anything but.  Its running time may be slightly lean – the album seeming to zip by in the blink of an eye – and it may be more varied than some of their past works, but, most importantly, there’s absolutely no filler.

Taking cue from the band’s hard and fast roots, ‘In A Video’ adopts a tough rhythm, topped with a ringing guitar lead.  Bonnel’s voice is gruff, but always allowing the delivery of his lyrics to remain accessible and audible, while the guitar lines adopt less tuneful, particularly pointed approach.  The playing is fantastic, taking each individual part and hammering it across, with no real need for any extra flourishes.  On the even more ragged title cut, it’s Miles Peck who takes the lead with a hefty rattle of a bass line, something which never lets up, not even once its swamped with a wall of guitars.  At over two and a half minutes it’s one of the discs lengthier cuts, but there’s so much going on here – the distorted vocal taking second place to the shredding guitars and that fabulous bass part – that you’ll need to spin it a few times to completely digest its overall brilliance. Similarly upbeat but packing far more melody into barely two minutes, ‘Librarians Are Hiding Something’ is a classic piece of punk pop – the kind that’s been a stable of Fat Wreck Chords for decades – melding a catchy chorus to a classic riff.  One listen to this and genre fans will quickly have this track earmarked as a favourite.  In fact, based on these three numbers alone, it is somewhat of a mystery as to why Swingin’ Utters have always seemed to live in the shadows of No Use For A Name et al whenever bands are name-checked.

With a spiky feel but trading in the punky sounds for maximum jangle, ‘Take a Walk With The Postman’ combines one of the album’s best arrangements with a simple, near inane hook that sticks in the head.  Musically, there’s a hint of British post-punk sounds, which suits the vocal style very well.   The similarly bouncy ‘Greener Grass’ mixes electric and acoustic elements and a Celtic influence.  While both numbers are obviously different, showing two very distinct influences that are pivotal to Swingin’ Utters diverse sound, the sheer energy that comes across remains a constant. ‘Military Barbara Billingsley’ keeps up the momentum with its punchiness.  On this particular number, the performances from all concerned are first rate; the double guitar attack from Jack Dalrymple and Darius Koski  offers a well executed mix of staccato riffing and (lurking in the back) muted accompaniment.  Such a shame they had to mention the insufferable Ricky Gervais, though…The sooner the Americans realise his recurring schtick of making jibes at the disabled and others he perceives as weak is the work of a (poorly trained) one-trick pony, the better.  [They make up for this by dedicating a song to the superb Dave Navarro elsewhere, so they’re forgiven!]

Possibly the weakest track, ‘I’m A Little Bit Country’ does exactly what it says on the tin.  With a stomping acoustic hoe-down of a tune, fortified by fiddles and banjos, the band tear through two and a half minutes with gusto and a self-depreciating lyric.  Bonnel’s gruff voice means there’s always that feeling that this could turn street-punk or even Pogues-esque on a whim, but it never does.  After a few plays, this certainly comes over like a bit of a novelty – but, hey, at least it’s a well played novelty. Finishing on a mellow note, ‘Sevita Sing’ finds the band wielding the acoustics once again on a folky ditty, over which the lead guitars provide a wistful and rather tasteful melody.  Quite unlike anything else on the album, drummer Greg McEntee even pulls out some bongos!  Is this really the work of three of the same guys who filled their 1995 New Red Archives LP ‘Streets of San Francisco’ with the sounds of classic punk, huge influences from Stiff Little Fingers…and more edgy street punk?  Maturity is a curious thing…

With no obvious skippers – the country tune isn’t even worth skipping, and then, some people will possibly love it – Swingin’ Utters should be commended on having released an album which, although varied, is surprisingly consistent.  It’s not easy mixing genres and moods and ending up with something that sounds like far more than a ragbag collection of different ideas. Highly recommended, ‘Poorly Formed’ is the work of a band still sounding vibrant some twenty plus years into their on/off career.