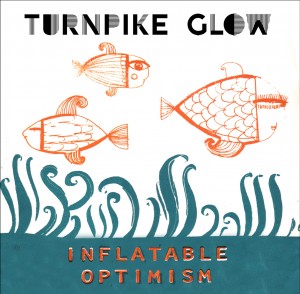 The four songs on this debut EP by Turnpike Glow present the beginnings of a band with a great talent.  There are various influences at play, and although each of them add plenty of colour to this London indie-rock quartet’s sound, there’s never anything that’s obviously plagiarised.  This is a band talented enough to borrow various styles and meld them into their own style, which throughout this release, treads a fine line between rhythmic sharpness and a garagey fuzziness.  Fuzz is cool, but, most importantly, Turnpike Glow have the songs necessary to back up the tunes – and a couple of them are absolutely terrific.

On two of the EP’s numbers, Turnpike Glow’s sound is rooted within 21st century indie pop.  ‘No More Dancing’ comes with a slightly distorted vocal, while a particularly loud drum gives things an extra edge.  From time to time, a few surprisingly funky moments hint at bands like Frankie & The Heartstrings – but only much better.  A similar mood drives ‘Marie’, largely thanks to Anthony Hutchinson’s tight drum grooves, over which some catchy woo-hoo vocals and occasionally surprising harmonies greet the ear.  Digging beneath the loud drum, you’ll also discover some lovely bass runs which, while relatively busy, are always melodic.  These tunes alone would be strong enough to recommend Turnpike Glow, but ‘Inflatable Optimism’s other pair of numbers are much stronger.

The EP’s unmissable tracks take the best elements of Turnpike Glow’s general sound and dish up something a touch more new wave influenced.  By the time ‘1986’ kicks in, there’s a vibe of an early XTC number played by Robert Pollard’s Boston Spaceships.  Guiseppe La Mela’s vocal is, again, distorted and a little ugly in places, although this is balanced out by a ridiculously catchy hook which isn’t even diminished by the presence of odd falsetto yelping.  With a spiky rhythm, largely driven by fuzzed up bass, ‘The Turn, The Pike, The Glow’ features great performances from each band member, but of particular note here are the ringing lead guitar parts connecting the verses.  Combined with another upfront drum part, they help to give this track a real feeling of urgency.

With a perfect mix of strong songs, great musicianship and a decent amount of controlled aggression, Turnpike Glow are worth seeking out.  In short:  If you like things with a strong indie-rock bias, you’ll want this.  You can stream the EP via the widget below.  [Also, watch the video clip for ‘The Turn, The Pike and The Glow’ at Popdodger.]