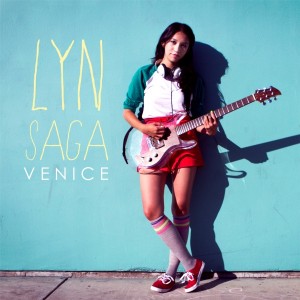 Appearances can be deceiving.  Despite the presence of a guitar, one look at Lyn Saga’s debut full-length album and you may be forgiven for thinking it is an album of shiny pop aimed at the teen market.  Her love of the pop-sock and the list of “fun facts” on her website [such as “Lyn’s favourite colour is purple.  Lyn uses arpeggios of cat noises as warm up tapes for shows” etc] may not be instantly attractive – or of any real importance – to the more mature audience either.  Here are the real facts about Lyn Saga: in her formative years, Lyn Saga spent every penny she could collecting records by the eras alternative rock greats.  Citing the likes of Hole, Smashing Pumpkins, Fountains of Wayne and Weezer among her early influences, she takes everything she’s ever learnt from those bands (particularly the latter) and, with her obvious ability to write catchy hooks, created a wonderfully radiant debut release.

Beginning with the title cut, the sheer weightiness of the music should win over most alt-rock/power pop afficianados.  The intro cheekily uses a similar guitar tone to ‘Smells Like Teen Spirit’, before a chunky riff in the vein of Fountains of Wayne in an aggressive mood takes over.  Naturally, Saga’s vocal is a little sugary, but since the combination of cutesy voice and gritty music recalls Kay Hanley and Letters To Cleo, that’s very appealing.  The combination of its key influences may be obvious, but Saga pulls together all the elements to create something enjoyable.  Just as she cheekily began the tune with something familiar, the blatant steal from Weezer’s ‘Buddy Holly’ at the close should raise a wry smile.

While that sets the tone for the rest of the album, the ante is upped by a couple of the following tunes.  One such number ‘This Way’ comes with a marching time signature which pulls the best from the hard chord structure and Saga’s vocal, but better still, it’s embellished with brass.  Such an arrangement keeps things incredibly buoyant and the upbeat qualities really hit home via a brief section clearly inspired by The Beach Boys ‘God Only Knows’.  The sunny musical vibes are often at odds with the hard confessional lyric regarding greater understanding and maturity, but that contrast makes this superb.

‘Life Is But a Dream’ could be accused of not using as much of Saga’s own style as before, since it’s even more of a blatent Weezer homage – right down to the brief stops in the chorus – but like Tally Hall’s ‘Two Wuv’, that isn’t necessary a bad thing.  The merest mention of Weezer means you’ll already have very strong ideas of how this sounds.  However, looking at the overall performance, there’s merit here: most of the melody is carried by a multi-tracked vocal, while a strong bassline and twin lead guitar solo provide the instrumental high points.  With its 90s chug colliding with a 50s doo wop lilt, ‘Runaway’ showcases almost as much love for Rivers Cuomo, but is perhaps a slightly better tune thanks to a more obvious sense of light and shade.  The chugging Weezer-isms are joined by strong pop vibe – equal parts that dog. and Letters To Cleo – resulting in more predictable (yet wholly enjoyable) retro rock. As to whether Lyn Saga’s influences are perhaps a little too obvious, given how many copies Weezer’s blue album sold in the US in the mid 90s, it’s only natural they would be a seminal influence for many.  Frankly, though, this album is much better than some of the other Weezer-style releases that have followed in the wake of that debut…including most of Weezer’s own work.

On the surface, ‘I Believe’ sticks out a little with a poppier bias and a sound that feels a touch more mechanical.  The lightness of the vocal gets a lighter tune to match, where the driving drum part – for once – takes precedence over the usual wall of guitars.  There’s a near danceable groove reinforced by a lot of hi-hat work, but digging deeper, Saga’s more typical Fountains of Wayne and Weezer obsessions are still in there with an occasional guitar part fighting to get out.  Perhaps the album’s most interesting number all round, ‘I Didn’t Mean To’ revisits the kind of punchy verses which adorn most of ‘Venice’s best tunes, this time adopting a marching beat.  To add extra interest, the previous power pop elements are complimented a touch of vaudeville jazziness. Centring around piano and glockenspiel accompaniments, these interludes recall works by the brilliant Hush Sound.

Using filters to give the impression of an older recording during its verses, Saga sounds like she’s singing down a telephone on the closing number, ‘We Didn’t Realise’.  This works fine against the samba-esque rhythms employed and provides a great contrast to the chorus sections where she reverts back into the hard-hitting Weezer/Anna Waronker /Letters To Cleo hybrid which she’s wisely chosen as her main calling card.

Comprising ten songs and clocking in at just half an hour, this is an excellent example of how to make a streamlined album with no obvious filler, the way people used to when approximately fifteen to twenty minutes of music per side constituted a full release.  Although ‘Venice’ is somewhat formulaic in places, if you dig any of the bands mentioned here, Lyn Saga should certainly be on your list of artists to investigate.