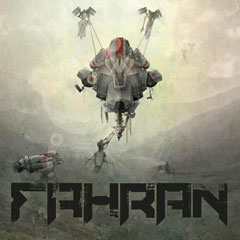 …And listening to this Fahran debut, what a voice he has.  He tackles each of these songs with a gritty hard rock maturity, occasionally pushing his voice a little, but mostly making the delivery of his rock-edged vocals appear easy, like a man with years of experience.  The greatness of Fahran as a band is quickly clear; following a brief instrumental piece, the upbeat ‘Silver Scene’ kicks in with intent.  Driven by a slightly muddy riff recalls the heavies moments of Skid Row’s classic ‘Slave To The Grind’, it also brings a lighter, slightly more melodic chorus could fit the style of bands like Black Stone Cherry.  Fahran don’t have the same southern drawl or bottom end groove of that particular band, but even so, their approach to a riff and heavy melodies could be seen as similar at times.  Pulling things to a close, a twin lead riff is used excellently, and overall, this track shows off most of the band’s best skills, thus making a good first impression.  ‘Cynics and Dreamers’ carries itself with a hefty stomp, as the twin guitars of Chris Byrne and Jake Graham lay down some serious chops.  This tune brings the best elements of 80s hard rock and a slightly meatier 90s sound together seamlessly, as another chugging riff is topped by some effortless, old fashioned ringing lead guitar soloing.

During ‘The Vagrant’, Alex Stroud gets to lead the way, pounding out a bass line which would befit many an eighties melodic metal classic, while another powerful vocal fills spaces over a very disjointed riff.  Between verses, those spaces are filled effectively with dirtier guitar parts, delivered with plenty of wah-wah and a little down-tuning.  As with ‘Silver Scene’ those heavier moments are joined by a very melodic chorus.  That careful balance between slightly bottom-heavy riffs and well-contructed melodic chorus proves to be Fahran’s strongest – and most consistent – calling card throughout this record.  The lead which kicks off ‘Bittersweet History’ comes as a slight surprise with it’s really eighties sound and general clarity.  Its absolutely classic tones would suggest someone within Fahran’s ranks is rather fond of many bands from the glory days of melodic rock/AOR, with the riff being particularly reminiscent of Nelson’s ‘After The Rain’.  This nod to a radio-friendly rock past isn’t just restricted to the intro either: the whole song works around that great riff, while the rest of the band sound more than confident in their roles as they approximate a recording which could have appeared on any number of classic rock discs.  While fans of classic rock should find tunes to enjoy scattered throughout this release, melodic rock aficionados would be advised to seek out this track specifically.

Following an atmospheric drum-fuelled intro, ‘Crude Design’ slips into something surprisingly off-kilter.  Yes, the kind of riffs you’ll have already come to associate with the band are still very much in the driving seat, but the time signatures shift unexepectly, allowing JR Windsor to drop in various double bass pedal moments and other unexpected fills not always present elsewhere.  While not as instantly likeable as, say, ‘The Vagrant’, a few plays in and this begins to click, thanks once again to that all important chorus – on which, Whitcroft sounds as assured as ever.  Faring a little less well, ‘Stay Alive’ sounds at first as if it’s going to be as strong as the other arrangements.   It pulls elements from each of Fahran’s strengths and the careful balance between grit and melody is very much evident, but despite a swaggering riff and big bass line, this track doesn’t seem quite as consistent. The fact that it doesn’t make quite such a lasting impression is, perhaps, testament to the powerful nature of the rest of the material. Balancing out the old school rock and occasional forays into AOR, the band go hell for leather on ‘We See Right Through You’ a full-speed rocker with the drums firmly in the driving seat.  Again, Fahran never under estimate the importance of melody, and here, they balance out the nearing speed-metal riffing of the verses with a big, mid-paced chorus modelled on classic eighties hard rock, while some near faultless twin lead guitar work filling an all too brief instrumental break.

The most important thing you need to know about Fahran, is that overall, this self-released disc is better than most of the records released by some of the labels specialising in classic/melodic rock.  It really deserves to put the band on the map.  It’s an album which should be heard by all fans of the slightly heavier end of classic hard rock.