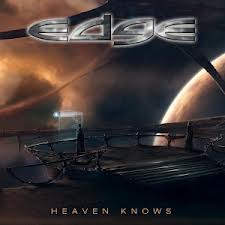 ‘Heaven Knows’ may be the first outing for Swedish rockers Edge, but the more aware listeners among you will certainly recognise a couple of band members.  The core of this band features vocalist Jonas Forss and guitarist Tobias Andersson, both of whom have also plied their trade as members of Seven Wishes.  Upon first hearing of these guys, one thing is evident: when recording this album, they had a bigger budget at their disposal than most.  From a technical perspective, ‘Heaven Knows’ is a great sounding disc, with plenty of punch.  Since so many lesser-known melodic rock bands feel that demo quality records are fit for release as finished product, the near impeccable sharpness here is most welcome indeed.

Combining years of experience with the great production and a few huge choruses, it seems that Edge are set to push all the right buttons for a classic melodic rock release.  Toning down the glam edges of Seven Wishes in favour of something closer to classic sounding melodic rock, Forss delivers all of his vocals with conviction and a curly accent, while Andersson’s guitar playing is fairly solid throughout.  He may not have the chops of Pole Position’s Lars Boquist, but he tackles each number with enough gusto to add a little more flair to this set of otherwise workman-like tunes.  Some may consider the phrase “workman-like” to be harsh, but as yet another small fish in a pond full of other second division melodic rockers [most of whom seem to be signed to Edge’s label Escape Music], that’s how this album often comes across.

There is one main reason for this: despite knowing how to put together a melodic rock number which boasts a good chorus (nearly) every time, Edge aren’t quite as adept at crafting varied tunes. The main problem stems from their insistence on pounding most things out at just above a mid-pace.  Aside from an obvious ballad, they rarely break beyond the boundaries set out by the opening track.  This means, individually, each of the songs are fine, but when tacked as a whole – which should still be the preferred way of hearing an album – it all begins to blur.  The differences between each number become so indistinct in places; it even sometimes feels as if Edge are recycling the same tune on occasion.

While ‘Heaven Knows’ is well played and well produced, there’s no real reason to recommend this above any number of melodic rock albums you could pick up instead.  Although better than some, this album just don’t possess that “something special” that’s necessary in order to make a more indelible impression, which is surprising considering the number of years each of the band members have worked within the scene.  At its very best, ‘Heaven Knows’ contains some rather fine stand-alone tunes, but looking at the album as a whole, it never feels like much more than a time filler.  Some of the more undemanding among you may be okay with that, but in all honesty, if you have that much time that needs filling, there are literally hundreds of better melodic rock albums with which to fill it.