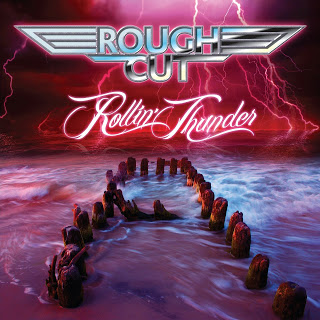 Within the first year of their existence, UK rockers Rough Cut have shared stages with cult rock bands Crashdiet and Jettblack.  They’ve supported the excellent Black Spiders.  They’ve even toured with American melodic rock legends Mr. Big – an impressive addition to the CV of any band, but especially so considering  Rough Cut were without a release behind them at that time.

On ‘Run Home’ – arguably the best track from this debut EP – Rough Cut attacks the listener with a hugely cocky guitar riff, its weightiness bolstered by a superb drum line from Jes Hartley.  Almost immediately, there’s a strong sense of Rough Cut’s love of classic rock and metal at the heart of their sound, although this is a band who never obviously set out to emulate any of their heroes or influences. The speed – if not necessarily the overall tone – evokes a mood of the early 80s New Wave of British Heavy Metal. This is something, perhaps, enforced a little farther by Jack Simkin’s vocal style; it’s not flat as such, but he favours a very natural tone which allows the Englishness of his vocal to cut through.  That said, his style is very complimentary the rest of the band as they power through this opening number – and, indeed, a couple of the others – at something nearing full-pelt.  If you don’t mind things adopting such a distinctly British slant, this is definitely enjoyable, especially as that great riff is coupled with a simple and relatively memorable chorus.

Another similarly full on hard rocker, ‘Romeo’s Dead’ doesn’t show much more of Rough Cuts talent, but, as before, the four musicians approach the material with a great power; a power evident even in the studio environment.  No nonsense riffing and another hooky chorus pass three minutes enjoyably, but the real high point is the guitar solo played by Simon J Court, whose blues edged, hard rock chops are terrific, filling a few bars with heavily wah-wahed notes like a true pro.
‘Midnight Rider’ starts excellently with some all-too-brief twin lead in the intro before the band career headlong into another punchy riff that’s not too far removed from those heard during the first two numbers.  While it may be tried-and-tested, the playing is spot on, with a great tightness in the rhythm section once again.  As before, Rough Cut ensure they take their meaty riffs and couple them with a decent chorus and the feeling of the band’s sweaty energy throughout really comes across on the recording.

In a slight change of pace, ‘Guardian Angel’ shows off a (slightly) more melodic side to Rough Cut.  After an acoustic intro (almost sounding like a quasi folk jig), the arrangement offers some terrific pumping bass, before settling into a more mid-paced rocker, again showcasing plenty of old-school chops.  At the slower pace, Simkin’s rough ‘n’ ready vocal approach seems more obvious than ever before, but he more than holds his own…and, obviously, a natural voice is often far more preferable to a voice subjected to studio shine. As with the other tracks, the highlight comes with the guitar solo; while a tad more restrained than before, it’s soon clear that although Rough Cut are a solidly talented quartet, it’s Court who is often in the driving seat.

Overall, ‘Rollin’ Thunder’ will certainly appeal to those who like a bit of trashy hard rock in the “classic” mould, even though three of the songs each have a very similar approach.  With a lot of potential and an obvious love of all things in the classic rock/old-school metal field, it’s just a pity they couldn’t have chosen a more distinctive name: for rock fans over a certain age, any band named Rough Cut are destined to be confused with Amir Derakh’s 80s hard rock band…