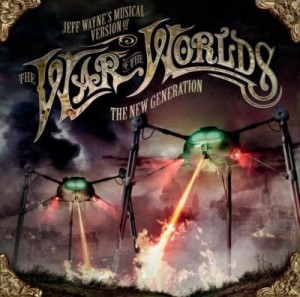 Jeff Wayne’s 1978 ‘Musical Version of The War of the Worlds’ is considered by many to be one of the finest records of its era.  Whether you’re either old enough to have  purchased it yourself at the time of release, or you’ve grown up with parents who enjoyed it, it’s an album which holds a special place for many. Even with it’s reliance on synthesised orchestras, its performances have survived the passing decades very well indeed.  Almost thirty five years on – after various re-issues of the original album and love them/hate them stage productions – comes this completely re-recorded version of his masterpiece, potentially tainting his legacy even further.

First off, it has to be said, Liam Neeson has none of the presence of Richard Burton.  In places, he doesn’t even have the same level of command that Anthony Hopkins bought to Wayne’s much maligned ‘Spartacus’.  He often seems like his narrative should be a louder.  Very little consideration has been given to the fact that his slightly gruff, slightly cracked voice – while a great speaking voice – doesn’t always have quite enough bottom end to carry itself against the kitchen-sink approach of the musical arrangements – and some rather aggressive synthesizers.

Since this would have been a perfect opportunity to do so, it’s a shame Wayne didn’t actually take time out to hire a real orchestra.  Within a few bars of ‘The Eve of The War’, the old-fashioned synths – if anything – sound even more synthetic than they did in the late 70s.  The funkiness of the arrangement is a touch less disco, but the relative danceability is still there, albeit in the form of programmed beats which would have sounded contemporary some twenty years before this recording was made.  All keyboard embellishments are sharper than before, but also horribly dated, while the “chances of anything” vocal lines appear terribly filtered.  Despite the faults, ‘Eve of the War’ is still an enjoyable tune, though it’s hugely likely that – for most people – any enjoyment only comes from having so many vivid memories associated with the original recording.

The rest of the album follows in a similar fashion – familiar, yet inferior, with musical arrangements that can no longer be labelled as being “of their time”, now just synthetic and horribly dated.  The bass on ‘Horsell Common and The Heat Ray’ is big, but oddly unsettling, but not in the cool way of its predecessor, but the guitar parts and drum parts have a stronger presence and welcome crispness – one of the few times this recording reaches anything like it’s real potential.  An over-reliance on really ugly synths, kills ‘The Artilleryman & The Fighting Machine’; attempts at cranking up the guitars in response doesn’t actually build tension as much as make the whole thing a little overbearing.

Closing the first half, the album’s two best songs – ‘Forever Autumn’ and ‘Thunderchild’ – are particularly nasty.  Justin Hayward’s reading of ‘Forever Autumn’ stands as one of the great 70s ballads and a watershed recording for the Moody Blues man.  Gary Barlow brings no emotion to the ‘New Generation’ recording: it’s not necessarily GB’s fault; he won’t have chosen to have his voice smoothed out/filtered in post-production.  During the track’s second half, Wayne crushes any hope of the track getting better as he instigates a programmed drum loop, adding an unwarranted clunky, rhythm track, thus adding slight dance elements where unnecessary, as if he’s pre-empting any future remixes.  For ‘Thunderchild’, singer-songwriter Alex Clare takes the reign for the album’s most rock-driven outing and tackles it with all the power of a wet lettuce, his thin vocal line nearly as weightless as the horrid synths which insist on cutting through anything half-decent.

Thankfully, the wandering ambient soundscapes of ‘The Red Weed (part 1)’ have not been subjected to any extra drums or anything to detract from music’s other-worldliness.  The synths that sound like flutes are almost identical to their 1978 counterpart, while a few others are a touch more gurgly (while not especially a necessary change, at least it’s one which fits the mood).  Most striking during these seven minutes are the moments of piano which cut through in a near avant-garde fashion; almost jazz like, they appear fleetingly, rattle the listener and then disappear, like something rising from the acres and acres of thick martian sludge.  ‘The Red Weed (part 2)’ is far less fortunate, having had its melodies beefed up and subjected to something akin to a Ben Liebrand remix, circa 1990.

As before, between the two encounters with the weed, ‘The Spirit of Man’ attempts to highlight the human struggle against the invaders.  In 1978, Thin Lizzy’s Phil Lynott gave the original album one of its strongest performances.  Do we get a rock icon here to fill his unfillable shoes?  No.  Step forward rapper/r ‘n’ b performer Maverick Sabre…  A man who manages to sing every line with such a reggae affectation that it’s almost impossible to make out the words in places, it’s a good job you all know them already.  Taking the thin-voiced (and over-rated) Julie Covington’s place as the pleading wife is soul diva Joss Stone – who unlike most of the performers here does her best with the material and delivers something she can at least be half proud of.  Kaiser Chiefs man Ricky Wilson’s faux cockney antics sound trite on ‘Brave New World’, a performance that has none of the (necessary) fine balance between fear and bravado that David Essex bought to the table.  There’s nothing else to add here except it (once again) suffers from a few unnecessary early nineties style beats…all topped with more questionable synths, some of which sound like Jarre cast-offs.

Between the martians yelling ‘ULLA!” and Richard Burton’s deep booming voice, the ‘Dead London’ climax gave children sleepless nights in the 70s and 80s.  There’s a unsettling nature here, but Neeson just doesn’t cut it…while the martians sound even more like a man yelling through a vocoder than ever before!  …And yet, when the martian voices cease, the few seconds of silence are genuinely chilling.  Like the preceding material, the moments of greatness are there, but so, so fleeting.  [Again, Why were we not treated to the presence of a real orchestra on these recordings? It would have at least given something ranging between awful and average a bit more gravitas].

On the one hand, it’s Wayne’s musical creation to twist and tweak how he sees fit, but on the other, other than to eek a few more quid out of a successful concept, this has no real purpose. It’s like “Jeff Wayne’s Karaoke Version of The War of The Worlds: The New Generation”.

For those who’ve never heard the original LP, the dated synth sounds here will possibly be too ugly for words, while for everyone else, there’s little to nothing here that holds a candle to its earlier counterpart.  ‘The New Generation’ is not awful, but in a few places it comes  pretty close.  If you’ve bought it, do the decent thing: listen to it out of politeness, maybe even some misdirected sense of duty, then file it next to your ‘Star Wars’ prequels and watch it gather dust.

1 thought on “JEFF WAYNE – Musical Version Of “The War Of The Worlds”: The New Generation”