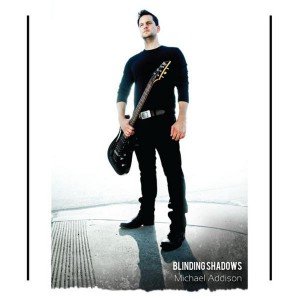 Michael Addison’s ‘Blinding Shadows’ has a few songs on it that, in theory, should appeal to those listeners who love melodic indie/alt rock from the nineties; people for whom albums like Goo Goo Dolls ‘A Boy Named Goo’ still hold a very special place.  On most of this release, the guitars chime like its 1994 and although a lot of the material becomes a bit formulaic after a while, there are a few strong choruses.

Sadly, most of those potentially enjoyable moments have the life squeezed from them thanks to far too much studio shine.  On the first three tracks in particular, Addison’s voice is filtered so heavily it seems to have no natural edge anymore. This sort of thing mightn’t be so much of a problem on the pop scene, but musically, these songs clearly aren’t meant for such an auto-tuned disposable market.  With the volume of the guitars, everything here deserves far more grit than it has been given and, with that, more real emotion.   The worst offender is ‘Alone’ (the album’s first single), where Addison barely hits any long notes and if he does, there is clearly a whole world of auto-tuning going on.  If you can make it past that, the ringing guitars and general radio-friendly tone shows off a solid song-writing talent, but for most of you, those vocal filters will be truly annoying to the point of distraction.

There are some (slightly) less clinical moments on ‘Blinding Shadows’, as evidenced on the quieter ‘All Your Might’ where Addison’s hushed tones were seemingly allowed to escape with something approaching a human quality.  Even here, though, it seems the focus gets shifted away from Addison as quickly as possible and subsequently thrust upon a female counterpart and the instrumentation (in this case, muted guitar rhythm and soft cello fill the space).  In terms of harder rock, ‘Tell Me Lies’ is a high point as it’s louder guitar-driven moments are very slightly reminiscent of sounds from the Minneapolis alt-rock scene of the very late 80s.  On closer inspection, beyond those ringing guitars, there’s not so much happening; Addison’s delivery, although far less filtered, appears mumbly and indistinct (this is something which really hits home once a louder female backing vocal appears).   At this point, you may find yourselves wondering why Addison didn’t settle for giving his (often) well-written tunes away to different performers…

Hard to believe given the amount of over-processed, shined-up-within-inches-of-its-life music on this disc that Addison’s press materials claim that ‘Blinding Shadows’ is “full of raw, hard rock energy” with “intense vocals”.  It is anything but.  While this album shows Addison to be a solid enough songwriter, his performances are absolutely lacking in any real dynamism.

If he chose the auto-tune and vocal filters for stylistic effect, it was a terrible choice.  If, on the other hand, those filters were employed to disguise any shortcomings within his natural delivery, why would he want to do that?  He would have been better off just embracing any idiosyncrasies in his performance (let’s face it, being less than perfect never hurt Paul Westerberg, Neil Young or many other heroes).  Ultimately, Addison offers ten songs that are too rock-driven for the pop market, but too clinical for almost any rock fans to connect with fully – and that’s rather unfortunate.