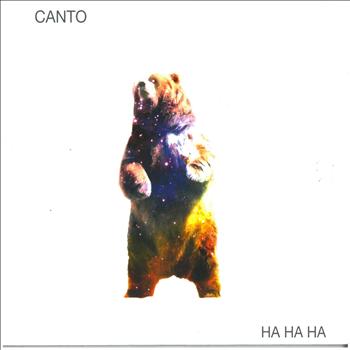 According to their website bio, Canto are a band who consider their music to be “influenced by the rock music from the sixties and seventies”.  While their music takes in a little blues, some funk rock, a little indie and huge chunks of fuzzed up blues-rock  – all of which come together to create a very accessible sound – this trio of brothers sound more like they’re channelling a 90s style revisitation of the 70s than anything else.

Their debut release ‘Ha Ha Ha’ kicks off with a short instrumental, ‘Adam & Eve’.  A good showcase for the band’s musical chops, this piece features a very seventies sounding lead guitar, underpinned by a superb bassline – the kind of thing a well-established jam band could turn into a tour-de-force.  ‘Sandpaper’ turns the funk grooves up to the max via a busy bassline, over which wah-wahed guitars churn out blues-rock riffs.  This alone provides a solid listen, and then Canto unveil the element that makes them sound a little different to other ‘retro’ outfits: Seamus Blackwell’s voice.   Whereas most similar bands would likely choose someone with a big voice, Seamus’s approach sounds more suited to an indie pop band than a band serving up funky retro rock.  In fact, on occasion, his voice bares more than a passing resemblance to Tim Booth (of popular 90s indie-poppers James), which probably lends a huge amount of weight to the overall feeling that Canto’s music shares as many influences from the 90s as it does from earlier decades.

A little off-centre, ‘The Big House’ works around a spiky riff and ringy countermelody.  Despite initial promise, it never completely finds its feet; perhaps a lack of chorus is to blame here, since it’s certainly not the Blackwell brothers’ standard of musicianship.  Mixing an indie jangle with another funk-rooted bassline, ‘Cardigan Sweater’ shows Canto in a better light, as they blend an upbeat, optimistic tune with a simple hook.  While Seamus’s guitar has a very pleasing tone and his vocal style is well suited to the piece, it is bassist Aiden Blackwell, whom – once again – brings most to the table.  His fluid style (pushed high in the mix throughout) is what often gives Canto’s music it’s most enjoyable quality, and this is no exception.   The single release ‘Farewell Well Well’ is an exceptionally tight workout where drummer David Blackwell moves between hard rock drumming and funk rhythms (with plenty of fills and hi-hats) with ease.  Despite a simple hook and a closing section with a meaty riff, this tune firmly belongs to the rhythm section.  The interplay between bass and guitar during the number’s first half makes this track Canto’s best, hands down.

On ‘William Byrd & His Contemporaries’, Canto move away from the more pointedly funky:  the guitars lay down a thick rhythm, the drums pound out a basic backbeat and the bass takes more of a simplistic approach.  On this number – although still recognisable as the same musicians who performed on those more groove-laden tunes – Canto offer a track which sounds more in keeping with 90s alternative.  Its simplicity doesn’t necessary make it any weaker…just different.  It would be unfair to say it does not suit the band since they prove equally adept here – it just feels a little misplaced among the other album cuts.

Quibbles about the seventies-ness of their chosen niche aside, Canto are obviously talented.  While ‘Ha Ha Ha’ isn’t a classic debut, the songs often have enjoyable moments.  If their whole sound doesn’t keep you listening, the intricacy within some of the basslines should provide sporadic entertainment.