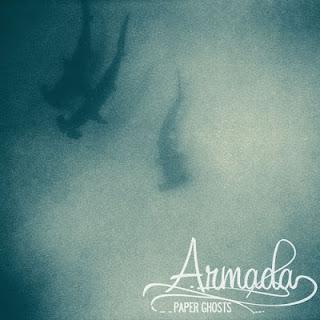 For a debut release from an independent band, ‘Paper Ghosts’ by LA trio Armada has a very sharp sound.  They’ve been smart enough to wait until they could record it on a reasonable budget…and it shows.  Producer Mike Boden (a man who’s previously helped engineer works by Joe Satriani, Journey, Mudvayne and many others), gives the band a big sound; one befitting of their mix of rock and blues based riffs.

Although not a perfect release, ‘Paper Ghosts’ features some enjoyable songs.  ‘Callanwolde’ is a tune that is hugely bass led and has an almost cocky tone.  With verses made up of a simple beat, dominant bass and reverb sounds, at first it leaves the listener wondering where it’s headed.  When the (understated) chorus kicks in, the guitars chime while the bassline drops in a couple of very complex fills which hint at funk.  The rest of the song is constructed from very fuzzy grooves which recall UK 90s bluesy indie-rockers Reef, albeit rather more aggressive.  In all, good stuff indeed, but on this debut record Armada deliver a few superior tunes.   Via slightly overdriven guitars and a pounding bassline, on ‘Up, Out’ shows the band playing with something bluesy.  The unfussy groove comes with a hefty swagger, but the real star on this tune is Cody Page whom, in addition to providing the main guitar riff, lays down a very emotive lead vocal with plenty of crying edge in his delivery.  By the time Armada get to the chorus, things toughen up a little more and the band’s brand of fuzzy blues-rock really makes its presence felt.

To begin with, ‘Young Man’ has a spacious feel.  The drums mark time and the guitars add hard, clanging chords over which Page’s lead voice is soulful and strong.  Holding everything together, Jeremy Gruber’s fluid basslines are the key to the track’s overall greatness.   Although only four and a half minutes in length, it’s two part structure makes it feel much longer…and not necessarily in a bad way.   The second half of the track drops the funkiness and settles into a mournful, slow arrangement – over which Page sounds equally confident.  To finish, all of this tunes best features pull together as a brief lead guitar break acts as a climax.  While there are a few unnecessary whoahs drawing attention away from the brilliant bass work, this is one of Armada’s best tunes.  ‘Ghosts of Illinois’ provides high energy enjoyment through some hard rhythmic chords, marching bass and drums, combined with a heavily filtered vocal.  Its relative simplicity makes it more disposable than most of Armada’s other tunes, but its spiky edge makes it sound as if it could be a corker within the band’s live set.

Lead single ‘Badge & Gun’ hits harder and faster than most, allowing drummer Eddie Core a chance to approach his kit in a slightly more aggressive fashion.  The guitar chords ring out with vibe more akin to 21st century indie rock, giving the number another slant not always present on most of this band’s other work.  It is well played, and even though the harder edges ought to make it appear more instant than Armada’s other songs, it doesn’t necessary grab the listener straight out, despite a slightly more obvious hook.  On the flipside, ‘Love You’ is wilfully minimalist: on one of the album’s misfires, Page spends over six minutes slowly strumming at his electric guitar (with a light drone providing a very slight accompaniment), his voice gently crying out all the while.  While a decent enough musical idea – one which adds an extra dimension to the Armada sound – it’s easy to understand why it should be included on this debut; it’s less easy to fathom why the band insisted on it going on for so long…so very long.

Armada are often great musicians and in Cody Page – once you tune into the slight wobble in his voice – they have an equally great vocalist.  What they don’t always have are instant hooks, but it’s possible they’re hoping the mix of mid-paced riffing and bluesy sensibilities will somehow slowly work its way under the skin.  It is, indeed, an album which takes time on the listener’s part to uncover the good moments, but they’re in there just waiting to be discovered.