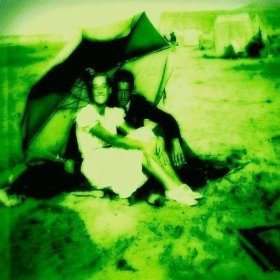 This 2012 release by art-rockers Post War Glamour Girls, capitalises on the great promise of the few singles which have been previously released.  A four-track EP, ‘Tragic Loss; he had such a lovely house’, is ugly and twisted, while at once epic and engaging.

Which a morse-like drum intro and a hard vocal ‘Today I Am a Man’ begins in a rather anxious manner.  By the time PWGG hit their stride, the combination of buzzsaw guitars and smashing drums creates something that sounds like The Birthday Party featuring Marc Ribot on guitar experimenting with more of a psychobilly mood.  This opening statement captures the unrestrained energy within the Leeds based four-piece excellently. In contrast, ‘Tremor’ shows a greater sophistication, harnessing those previous energies with haunting, quieter passages which push a male/female dual vocal to the fore.  The guitars adopt a lovely 50’s echo while, as before, the drums are often the dominant force.  This pair of tunes are like a yin and yang from which most – but not all – of PWGG’s strongest influences come into play; both excellent, but for completely different reasons.

‘The Trawler Man’s Code’ creeps in with atmospheric clanking and droning, but it’s not long before the staccato guitar parts start ringing out and the voice creaks and croons drawing in the listener.  For what passes as a chorus, there’s far more of a melody melody at play here, borrowing bits from the 80s goth movement and blending them with other fuzzy noises to create something alternative yet wholly accessible.   Saving the best for last, ‘She Will Always Be My Anchor’ begins with a slow, doomy intro.  Just as the listener is fooled into thinking PWGG are heading into a four minute sludge-fest, the chords crank out an unsettling and distorted waltz, while a suitably aggressive voice sweeps between a croon an full-on shouting.  Again, comparisons with the more aggressive works of Nick Cave just cannot be avoided, while the music – part waltz, part drunken sway – borrows a heavy influence from the one and only Tom Waits.  During the quieter moments, the drums sound fabulous against a wailing voice, while at the other end of the scale, there are huge skull-pounding riffs.  Imagine Kurt Weill’s work given a distorted makeover and you’ll pretty much capture the spirit of the piece.  In case you were in any doubt, this track (and, indeed, the rest of ‘Tragic Loss; he had such a lovely house’) is bloody amazing.

The Cave-esque lead vocal will provide comforting familiarity to some, while naturally will be off-putting to the more foolish.  Post-War Glamour Girls are far more than the sum of their more obvious influences, though…and as a result, this EP is essential.