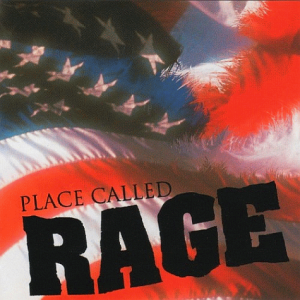 Both already well-known faces on the melodic rock circuit, in 1995, guitarist Al Pitrelli (ex-Widowmaker/Asia) and ex-Saraya drummer Chuck Bonfante teamed up with vocalist Tommy Farese and bassist Danny Miranda to create some new music.  The resulting album – recorded in just one week and released under the name Place Called Rage – was subsequently only ever released for the Japanese market.  That is until 2012, when UK label Escape Music picked up the licence and issued a remastered version of the disc, thus making it easily available for European audiences for the very first time.

‘I Know Where You Been’ lays the foundations for the bulk of Place Called Rage’s music.  Pitrelli offers up a meaty riff, mostly of the no-nonsense hard rock variety, while an old-fashioned layer of organ mixed with some bar-room piano and Farese’s strong and slightly raspy vocal delivery leans far more towards a classic brand of blues rock.  The arrival of a pitch perfect solo from Pitrelli mid-way ups the ante somewhat with a selection of noodly notes (again with an accent on bluesy hard rock) making a strong opener, overall.  Better still, ‘One Child’ is delivered with some solid bluesy foundations in a Little Caesar and (middle-period) Whitesnake fashion.  On this particular number, the no-frills production sound is beneficial in bringing out the natural sound of Bonfante’s drums, lending a real energy to the performance.   Those looking for something a little moodier may find enjoyment from ‘What These Eyes Have Seen’.  Again, there are many elements recalling classic seventies rock bands; the riffs are simple and uncompromising while another appearance from the organ just adds to the old-fashioned/classic mood.  Despite being rhythmically sound, it’s the two lead performances which ultimately win out.  On a slower arrangement such as this, Farese really gets the chance to shine vocally with his voice coming across like a raspy Glenn Hughes on occasion, while Pitrelli’s lead work is impeccable – shifting between hard bluesy notes and melodic metal shredding with ease.

Elsewhere, ‘Thunderbox’ celebrates a trashier rock ‘n’ roll sensibility with a simple riff and more organ backing.  As the track progresses, although it never gets any more complex on the surface, close attention should be paid to Miranda’s bass playing; between the unfussy pumping notes, he inserts fluid fills without ever sounding like he’s shoehorned them in for the sake of flashiness. His playing lifts the track above the status of “run-of-the-mill stomper”, even though a few of the lyrics seem destined to bring it crashing back to earth.   Beginning with a classy piano riff (played by Pitrelli, who handles all keyboards on this release), ‘Jenny Doesn’t Live Here Anymore’ offers the listener something much softer than most of Place Called Rage’s stock-in-trade sounds.  On this co-write with AOR legend Mark Mangold, the piano, acoustic guitars and a live sounding drum create a simple – yet ultimately very satisfying – base which sounds a touch like the Faces with an early seventies vibe, before moving into something more hard rock based.  For the track’s second half, the realm of the rock ballad looms large, with Place Called Rage just about holding onto their retro-rock roots.  By the time Farese gets into things, it really ought to have been the album’s stand out track, but, in places, his raspy vocal is so overworked it makes difficult listening. [Luckily, recognising this track’s great potential, Pitrelli and Bonfante chose to re-record it with a far superior vocalist a couple of years later].

A true stand out, the band’s eponymously titled tune throws away the more obvious blues-rock chops for something very funky.  While Pitrelli’s main contributions stay as hard as before, bassist Danny Miranda really gets to show off his skills, offering up a truly funky bass riff almost consistently.  The political message within the lyrics comes across as rather heavy handed, but musically this is so good, that can be overlooked just enough for the whole package to remain enjoyable. Another of the album’s best numbers, ‘We’re Not Coming Home’ starts slowly, with a heavily filtered vocal meeting some clean-toned guitar.  By the time it kicks in, the band’s typical sound present, before being pushed a touch farther into a hard rock/funky blues direction.  This slight shift creates one of the album’s strongest arrangements – the kind which again would have suited David Coverdale in the early eighties.  While Pitrelli’s tone is great throughout (and a solo is greater) it is not always the music that is the most striking feature.  Unusually here, it is a few of its lyrics that make an impression, tackling the plight of the Jews during the Second World War…and somehow, they do so without, at the very least, seeming wholly misguided.  [While still not the best politically based lyric writing you’ll ever hear, on this pair or tunes, Place Called Rage achieves the rarity of fusing melodic rock and politics without any huge embarrassment.  The two things don’t always mix: see Gary Barden’s 2011 release for Escape for a howling example of “when rock music and political comment goes horribly wrong”].

Just as quickly as they formed, Place Called Rage subsequently disbanded.  Farese went on to work with Trans Siberian Orchestra and Miranda achieved success with the hugely popular Blue Oyster Cult.  For fans of this Place Called Rage disc, however, Pitrelli and Bonfante’s next move would be of much stronger interest…  After drafting in songwriter keyboard player Mark Mangold full time and hooking up with Tyketto’s vocalist Danny Vaughn, another, even stronger blues-rock band was born.  Taking the name Flesh & Blood, in 1997, that band’s sole release (‘Blues For Daze’) proved to be a logical continuation of the Place Called Rage sound (something truly cemented by including re-recordings of ‘I Know Where You Been’ and ‘Jenny Doesn’t Live Here Anymore’).

Reissuing this album was a smart move on Escape Music’s part, since although ‘Place Called Rage’ isn’t a bonafide classic – or indeed, quite as good as the Flesh & Blood disc – these gritty performances definitely should have been allowed to reach a larger audience the first time around.  For those who enjoyed the Flesh & Blood disc, Place Called Rage (both the band and album) provides an enjoyable companion piece.