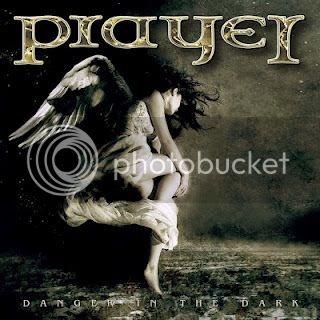 Finnish rockers Prayer issued their debut album ‘Wrong Address’ on the Escape Music label in 2005, before subsequently disappearing.  In 2012, the band name was resurrected, but only vocalist/chief songwriter Tapani Tikkanen remained from the band’s previous incarnation.  On this second album ‘Danger In The Dark’ – and with a completely new backing band in tow – Tikkanen reinforces any ideas that he’s the man in charge here, and while his songwriting chops are the kind which ought to please a fair few fans of the melodic rock genre, his vocal style may not be to everyone’s tastes.  Luckily, after a few plays, his slightly accented, warbling vocals take second place to the fact he clearly knows how to pen a good chorus.

Although Prayer have been likened to Canadian giants Saga, you won’t find a great amount of prog influences within the tunes that make up this release; the overall tone is more of the unashamedly pompy variety, offering a bunch of songs which combine reasonable amounts of power and melody.  Yes, the vocals could be a touch more melodic, but if you have a liking for twin guitars and blankets of keyboards, Prayer’s sound could still be strong enough to reel you in.

The melodic punch of the title cut recalls work of many AOR bands from the last gasp of the genre’s classic years (circa 1993), with the bass and keyboards taking a strong lead.  Throughout the number, those keyboards – played by Prayer’s second guitarist Valtteri Tikkanen – are used purely for musical colour, and as such, do a very good job.  Without them, the arrangement would seem somewhat lacking.  While the lead vocals aren’t the most tuneful, a strong chorus ensures Prayer begin on the right foot with a strong opening track. ‘Nobody Loves You’ has a striking intro, making excellent use of a twin lead guitar riff that recurs throughout.  It’s a shame more couldn’t have been made of it, since the moments between are a touch predictable, not moving too far from the blueprint laid down by the first track.  On the plus side, the lead guitar break – full of sweeping notes and a great tone – provides a little more enjoyment.   Although it provides no musical surprises, ‘Never Let Your Dreams Die’ is chockfull of hooky melodic elements, as Prayer ring as much power from a well-crafted chorus as possible and the band deliver another solid tune.  Once again, it’s the work of those guitarists which really makes the song stand up, with their twin riffing and some top-notch solo work.

After an intro where the music briefly takes a back seat, pushing Tapani’s voice to the front (sadly, the weakest element of Prayer’s sound), ‘Find Another Fool’ eventually blossoms into the one of the album’s strongest cuts.  An almost mechanical upbeat pulse replaces Prayer’s oft-favoured mid-paced approach; the guitars ring, the keys move between pompy chords and pure AOR tinkling, while again, the chorus is very strong.  By the time a twin lead guitar break fills the mid-section, it’s obvious that Prayer have a fair amount of talent: it’s just a shame the song couldn’t be tackled by someone with a stronger vocal.  That aside, it’s a great melodic rock track.  Another enjoyable offering, ‘It’s Not The End’, allows the bass more room in the mix, as Mika Pohjola leads a mid-paced, slightly swaggering rock number.  The vocals are a touch more restrained, the keyboards add an extra eighties vibe (always welcome), while the guitars bring a simple (slightly Thin Lizzy-esque) riff, topping things off nicely.  It’s not very complex, but therein lies most of the charm.

Although songs with the word “rock” in their title have the potential of being gut-wrenchingly embarrassing, Prayer manage to come up trumps on the unashamedly cheesy ‘Heart Wants You To Rock’, as they bring their listeners another (slightly different) variant of twin lead guitars and melodic keyboard work.  Without doubt here, the most enjoyable element comes from the track’s intro which is pure Thin Lizzy.  Still, if you’re gonna borrow something, borrow from the best!   Although this album has no obvious standouts, it’s not an album that includes anything truly awful either, but ‘KP’ – with softer sections which feature just vocals and keyboards – is somewhat trying.  Since those sections are designed to come across as the most emotive on this album and Tapani’s voice just isn’t strong enough to stand up with such minimal musical backing, it really lets this track down.  A lack of obvious chorus also works to the negative, making this particular four and a half minute number feel as if it is overlong.

Although not a classic release, ‘Danger In The Dark’ has solid enough foundations.  If you’re the kind of person who sets their expectations high when it comes to melodic rock, this will be an album you’ll likely spin a couple of times and then move on.  If, however – like the chaps at Escape Music – you have a fascination with lesser-known Scandinavian hard rock bands (and there are plenty of people out there over a certain age to which that definitely applies), you’ll probably find more than enough enjoyment here.