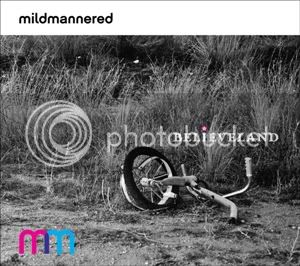 Mild Mannered’s history dates back to the early 2000’s, when Jennifer and Pat Casa – recording as Starberry – released two home-recorded albums. The first of those releases earned the pair a “band of the week” accolade from the Cleveland Scene online news magazine. Time passed, and eventually the pair hooked up with guitarist/bassist Tim Parnin [previously associated with The Chuck Mosley band, featuring – unsurprisingly enough – one Chuck Mosley, previously of Faith No More and Cement]. With the addition of Parnin, the Casas renamed the band Mild Mannered. Their debut album ‘Believeland’ features various nods to the 90s alternative scene and, for those who still hanker after those sounds, is a release which will strike in chord in a few places.

Chunky guitars crash against a barrage of hi-hats during the intro of ‘Back Home’ which sounds even better once the bass sits on top of the arrangement. Jennifer Casa’s lead vocal is full of long notes which, at first, sound slightly flat, but once the end of the chorus chimes in, it’s obvious, like Deborah Harry back in the 70s and Chrissie Hynde in the 80s, this is a probably a stylised choice. By the middle of the song, you’ll be transported back to the glory days of bands like Belly, Sleater-Kinney and Velocity Girl. The semi-acoustic ‘Keys To Rio’ has a pleasing jangle, but very little to back that up. Casa’s vocal is in a similar style once again, but doesn’t work quite as well as the opener; on the first couple of listens it seems like a rather long three-and-a-half minutes. Although the main hook could have been stronger, subsequent spins reveal previously undiscovered charms, so it’s a number worth persevering with.

‘Applehead’ is potentially nasty, due to a stabbed Casiotone piano, grating mariachi trumpet, and unrestrained vocal. The slightly out-of-tune nature is bound to remind some listeners of Denver, CO band Dressy Bessy, but unless you absolutely love those guys, this one’s a definite skipper. It could be worse though, it could include a choir of singing children… Oh. ‘Me’ brings things back into the land of sanity with a decent rocker, this time featuring sludgy rhythm guitars and a wailing lead. The in-your-face brand of 90s alternativeness here doesn’t bring anything new to the genre, though as before, if you spent the second half of that decade pumped up on Hole and Sleater-Kinney, you’ll probably love this. Similarly, the adrenalin-driven ‘Satifaction’ brings more guitar-based buzzes – and with this number, the big hooks come courtesy of a fantastically playful guitar lead during the intro and a good use of harmony vocals. In terms of actual chorus though, it’s severely lacking, but once those other elements are taken into consideration, that doesn’t really matter.

It’s on the not-quite punk pop number ‘Wonder’ where Mild Mannered offer a short burst of absolute brilliance. Over super-jangly rhythms and a hard snare drum, Jennifer Casa’s vocals are the album’s best. Gone are the slightly flat, stylised edges; in their place, a breezy delivery which recalls cult bubblegum punkers Cub. In a complete change of style ‘Eclipse’ is also enjoyable, being constructed via keyboard drones, electronic loops and a clicking drum machine. Once the guitars arrive, things are slightly more driven and Jen’s lead vocal has a hint of Kristin Hersh as she powers her vocal against the cold guitar sounds. Like ‘Applehead’, ‘The Ones Who Got Away’ turns down the guitars and brings the piano to the fore, but also like ‘Applehead’, it’s not especially good. The backing vocals are reasonable, but once again, the lead has elements which grate slightly. On the plus side, Tim Parnin’s bass adds a few good moments to this number, and it’s sixties girl-group vibe on occasion makes it easy to see what the band were aiming for here. Generally speaking, however, it’s another track which suggests they really need to stop tinkering with piano tunes.

Mild Mannered have some good – if not always especially original – musical ideas, and their various 90s moods are capable of making the listener feel a certain degree of nostialgia. But unlike other 90s revivalists Yuck, that nostalgia brought by Mild Mannered is more of the happy kind. They miss the mark rather dramatically on a couple of songs, but in the main, if you like any of the bands mentioned here, you could do far worse than check out ‘Believeland’.