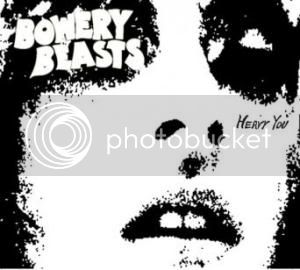 Bowery Beasts have been hyped as the best band to come out of Los Angeles for years. Former Sex Pistols man Steve Jones has been very vocal about them. Their ‘Heavy You’ EP is a fairly intense mix of alternative rock sounds, which initially isn’t so easy to grasp.

‘He Was Your First Tattoo’ works around a groove-led drum rhythm, which at first makes the listener think we’re headed for garage rock territory. However, those drums are a bit of red herring, as once the chorus rolls around, the band have settled into a mid-paced alt-rock groove. The drums retain a great live sound throughout. In places, the rhythm guitars jangle from the right speaker, at the bottom of the mix overlaid by a whole world of other guitar parts. Marion Belle’s vocals fuse elements of alternative 90s rock and 1970 rock star wailing in such a way that gives Bowery Beasts a proper edginess. It’s a number which requires a few spins for it to reveal all of its many layers, but after a while, Bowery Beasts’ style seems to work…even though at times you might try and convince yourself it shouldn’t.

After a brief intro of feedback, ‘White Diamond Babe’ provides jangly guitar rock in a fairly predictable fashion. The most striking feature is another rock solid drum part until the chorus where Belle pushes his vocal to extremes, at times hitting a piercing banshee wail. Among the more ordinary indie-rock elements, there’s a moment which appears a little darker with fuzzy sampled voices and reverb. Underneath the layers of guitar, there are hints of a great bass line. The upbeat ‘Young Rockers’ shows Bowery Beasts at their most accessible – at least in terms of radio friendliness – with a strong hook, more restrained vocal and multilayered guitars. It’s the EP’s most sing-along offering, certainly, but it’s relatively safe approach means it’s not always as distinctive as Bowery Beasts are capable of being.

‘Amulet’ provides a change in mood, with plenty of acoustics overlaid by ringing electric guitar, The vocals harmonise for a huge part of the number, which uses of lots of retro rock elements, both from the 90s and 70s, with a reverb filled guitar solo filling several bars towards the track’s end. Its familiarity is certainly comforting, though Belle’s shriek which cuts through a good proportion of the track will not be easy listening for everyone. The closing number, ‘Rock N Roll Queen’, continues in a mellow vibe, as acoustic guitar work is joined by sparing piano lines and the sound of flutes. Each of these elements combined create something magical. It provides a great contrast with the darker edges present on ‘White Diamond Blue’. Belle’s vocal style features moments where you’d think he was evoking the spirit of Mother Love Bone/Malfunkshun legend Andrew Wood; something which becomes really obvious when he delivers the word “honey” with almost exactly the same affectation.

‘Heavy You’ is unlikely to click with you on first hearing. It may not even click with you on the second. Some of you might not even get it at all. It may not always be easy listening (and most of it isn’t as dreamy and smooth as a few of the non-EP tracks floating around the net, ‘Jean’ in particular) but perseverance definitely pays off, since this release features some great moments.